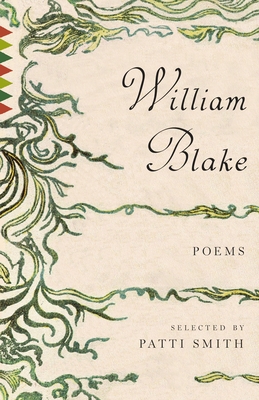 William Blake is one of England’s most fascinating writers; he was not only a groundbreaking poet, but also a painter, engraver, radical, and mystic. Although Blake was dismissed as an eccentric by his contemporaries, his powerful and richly symbolic poetry has been a fertile source of inspiration to the many writers and artists who have followed in his footsteps. In this collection Patti Smith brings together her personal favorites of Blake’s poems, including the complete Songs of Innocence and Songs of Experience, to give a singular picture of this unique genius, whom she calls in her moving introduction “the spiritual ancestor” of generations of poets.

WILLIAM BLAKE was born in London in 1757. He was educated at home and then worked as an apprentice to the engraver James Basire before joining the Royal Academy in 1779. In 1782 he married Catherine Boucher, and a year later began his career as a poet when he published Poetical Sketches. This was followed by Songs of Innocence (1789) and Songs of Experience (1794), which he also designed and engraved. His other major literary works include The Book of Thel (1789), The Marriage of Heaven and Hell (c. 1793), Milton (1804–8), and Jerusalem (1804–20). He produced many paintings and engravings during his lifetime. Blake died in 1827.

PATTI SMITH is a writer, performer, and visual artist. She gained recognition in the 1970s for her revolutionary merging of poetry and rock. She has released twelve albums, including Horses, which has been hailed as one of the top one hundred albums of all time by Rolling Stone. Smith had her first exhibit of drawings at the Gotham Book Mart in 1973 and has been represented by the Robert Miller Gallery since 1978. Her books include M Train, Just Kids (winner of the National Book Award), Wītt, Babel, Woolgathering, The Coral Sea, and Auguries of Innocence. In 2005, the French Ministry of Culture awarded Smith the title of Commandeur des Arts et des Lettres, the highest honor given to an artist by the French Republic. She was inducted into the Rock and Roll Hall of Fame in 2007. Smith married the musician Fred Sonic Smith in 1980. They had a son, Jackson, and a daughter, Jesse. Smith resides in New York City.