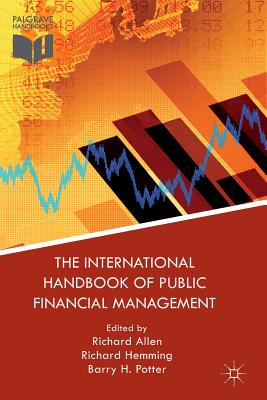 The International Handbook of Public Financial Management is essential reading for governmental policy-makers, and practitioners and consultants working in this field, whose importance has been highlighted by the global financial crisis. It is a primary source for academics and students of economics, public finance, accountancy and public policy.

Richard Allen is an economist and public finance expert. He is currently working as a consultant with the World Bank. Richard was a senior official of the U.K. Ministry of Finance (H.M. Treasury) until 1995. Subsequently, he worked with the OECD in Paris, the Asian Development Bank, the World Bank, and the IMF's Fiscal Affairs Department. Richard is the co-editor of a standard reference book on Managing Public Expenditure: a Reference Book for Transition Countries, OECD, 2001--and several other books and articles on public financial management. He has advised governments in more than 50 countries on strengthening their budget systems and public finances. Richard Hemming is an economist and fiscal policy expert with wide-ranging industrial and developing country experience. He is currently Visiting Professor at the Duke Center for International Development, and a consultant for the World Bank. He worked for 24 years in the IMF, and was Deputy Director of the Fiscal Affairs Department until August 2008. Prior to joining the IMF, Richard worked at the OECD and, before that, was a researcher at the Institute for Fiscal Studies in London, and a university lecturer in the U.K. and Australia. He has published widely on tax, social security, public expenditure and other fiscal issues. Barry Potter is an economist and public finance expert with wide ranging experience in the U.K. government, consulting and the IMF. He was a senior official in the U.K. Cabinet Office and H.M. Treasury in the 1980s, and Private Secretary to the British Prime Minister (Mrs. Thatcher) from 1990-1992. Subsequently, Barry worked in the Fiscal Affairs Department of the IMF, where he was Division Chief for Public Financial Management, later becoming Director of the Fund's Office of Budget and Planning in 2001, and the IMF's Special Representative to the United Nations in 2007. He is the author (with Jack Diamond) of Guidelines for Public Expenditure Management, International Monetary Fund, 1999, and several other publications.