The Trinity Six: A Novel (Paperback) 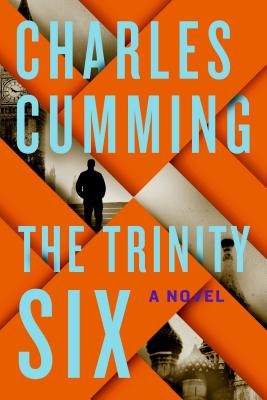 A Washington Post Notable Fiction Book of the Year

The most closely-guarded secret of the Cold War is about to be exposed – the identity of a SIXTH member of the infamous Cambridge spy ring. And people are killing for it, in Charles Cumming's bestselling thriller The Trinity Six.

London, 1992. Late one night, Edward Crane, 76, is declared dead at a London hospital. An obituary describes him only as a 'resourceful career diplomat'. But Crane was much more than that – and the circumstances surrounding his death are far from what they seem.

Fifteen years later, academic Sam Gaddis needs money. When a journalist friend asks for his help researching a possible sixth member of the notorious Trinity spy ring, Gaddis knows that she's onto a story that could turn his fortunes around. But within hours the journalist is dead, apparently from a heart attack.

Taking over her investigation, Gaddis trails a man who claims to know the truth about Edward Crane. Europe still echoes with decades of deadly disinformation on both sides of the Iron Curtain. And as Gaddis follows a series of leads across the continent, he approaches a shocking revelation – one which will rock the foundations of politics from London to Moscow…

"Cumming's novel is characterized by a gripping sense of realism. He displays a vast knowledge of spycraft and Cold War history, and the dense, three-dimensional world he crafts comes complete with seedy hotels and smoky nightclubs. The result is absolutely gripping. Taut, atmospheric and immersive—an instant classic." – Kirkus Reviews (starred review) on The Trinity Six

“A lively thriller...astute...inventitve...Cumming provides a notable addition to the accounts of the Cambridge spies.” —The New York Times Book Review

“Brilliant…Cumming writes smart, seductive prose, and he's gifted at revealing the subtleties of personality. Scene after scene crackles with excitement, tension and suspense. The novel's ingenious plot is almost as complicated as real life, but as one astonishing revelation follows another, the book is all but impossible to put aside..” —The Washington Post

“Cumming's novel is characterized by a gripping sense of realism. He displays a vast knowledge of spycraft and Cold War history, and the dense, three-dimensional world he crafts comes complete with seedy hotels and smoky nightclubs. The result is absolutely gripping.” —Kirkus

“The Trinity Six is a fine successor to Typhoon for a young author already compared with le Carré and Littell.” —Booklist