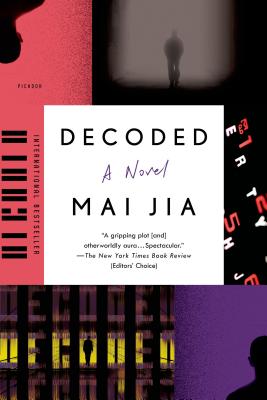 Rong Jinzhen, an autistic math genius with a past shrouded in myth, is forced to abandon his academic pursuits when he is recruited into Unit 701: a top-secret Chinese intelligence agency whose sole purpose is counterespionage and code-breaking. As China's greatest cryptographer, Rong discovers that the mastermind behind the maddeningly difficult Purple Code is his former teacher and best friend, who is now working for China's enemy—but this is only the first of many betrayals.

The first novel to be published in English by one of China's greatest contemporary writers, Decoded is a riveting tale of obsession and a profound exploration of the mind of an inspired genius, one that discovers in cryptography the key to the human heart.

Mai Jia, who spent many years in the Chinese intelligence services, is one of China’s bestselling and most famous writers. He is the author of four novels, three of which have been turned into television series and films. Mai has won almost every major book prize in China, including its highest literary honor, the Mao Dun Literature Prize. Decoded is his first novel to be published in English.

“Mai plays adroitly with literary genre and crafts a story of Borgesian subtlety and complexity.” —The New Yorker

“There is a determination to unsettle the reader; an uneasiness about settling on one focused point of view . . . [Decoded's] deviations take the novel out of the realms of the hard-edged thriller into somewhere more surreal and unexpected.” —Tash Aw, The Telegraph (London)

“Decoded stands out among Chinese novels for its pace, liveliness, and the sheer novelty of the tale it tells. It grips from the first page . . . It is an absolute joy to read.” —The Economist

“Decoded is a subtle and complex exploration of cryptography, politics, dreams and their significance . . . There is much of interest in this book, from the strange, superstitious beginning to the gradual decline of the Rong family as the twentieth century progresses . . . But, in the end, it is the complexity of the characters that is Decoded's enduring pleasure.” —The Times Literary Supplement

“Between the thrills of pulp fiction and those novels which come to be considered classics, there are boundaries and lines which, for many writers, are difficult to cross, and may take a lifetime (if ever) to realize. Mai Jia's achievement is that he has overcome that barrier with steady and assured strides. The footprints he has left behind form an ingenious, secretive literary treasure map.” —Wong Kar-wai, director of The Grandmaster

“When I say that [Decoded] is excellent, I am referring both to its remarkable literary qualities and to the fact that it demands to be read in a single sitting.” —Alai, Mao Dun Literature Prize–winning author of Red Poppies

“The illogical nature of destiny, the brilliance and fragility of genius, and circumstances that bind people together irrevocably as they drift through the darkness of the night all form part of Mai Jia's strange and mysterious novel.” —Beijing Evening News