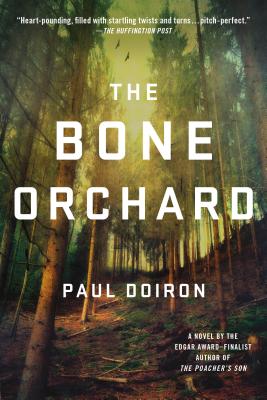 This is book number 5 in the Mike Bowditch Mysteries series.

"The Bone Orchard [is] both a rich exploration of character and a satisfying mystery." —Bruce DeSilva, Associated Press"Excellent . . . Thoughtful plotting and strong characters raise this above the crime novel pack." —Publishers weekly

In the aftermath of a family tragedy, Mike Bowditch has left the Maine Warden Service and is working as a fishing guide in the North Woods. But when his mentor Sgt. Kathy Frost is forced to kill a troubled war veteran in an apparent case of "suicide by cop," he begins having second thoughts about his decision.

Now Kathy finds herself the target of a government inquiry and outrage from the dead soldier's platoon mates. Soon she finds herself in the sights of a sniper, as well. When the sergeant is shot outside her farmhouse, Mike joins the hunt to find the mysterious man responsible. To do so, the ex-warden must plunge into his friend's secret past—even as a beautiful woman from Mike's own past returns, throwing into jeopardy his tentative romance with wildlife biologist Stacey Stevens.

As Kathy Frost lies on the brink of death and a dangerous shooter stalks the blueberry barrens of central Maine, Bowditch is forced to confront the choices he has made and determine, once and for all, the kind of man he truly is, in The Bone Orchard by Paul Doiron.

“Massacre Pond is a tough act to follow, but Doiron avoids series stagnancy by placing Bowditch outside of the law-enforcement circle he once loved and treating readers to another round of top-notch outdoors-Maine descrition. Highly recommended for fans of C.J. Box and Craig Johnson.” —Booklist

“Bad Little Falls is a jewel of a book. Doiron has gotten it all magnificently right: a hell of a good mystery, beautifully drawn landscape and characters so evocatively written they follow you off the page. Buy this. The guy can write.” —Nevada Barr, New York Times bestselling author of Rope

“A high-stakes, high-tension yarn in which you keep wishing everything would turn out fine for the deeply flawed, deeply sympathetic hero.” —Kirkus