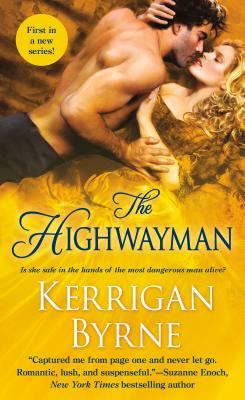 This is book number 1 in the Victorian Rebels series.

They're rebels, scoundrels, and blackguards-dark, dashing men on the wrong side of the law. But for the women who love them, a hint of danger only makes the heart beat faster, in the stunning debut historical romance The Highwayman by Kerrigan Byrne.

STEALING BEAUTY
Dorian Blackwell, the Blackheart of Ben More, is a ruthless villain. Scarred and hard-hearted, Dorian is one of Victorian London's wealthiest, most influential men who will stop at nothing to wreak vengeance on those who've wronged him...and will fight to the death to seize what he wants. The lovely, still innocent widow Farah Leigh Mackenzie is no exception-and soon Dorian whisks the beautiful lass away to his sanctuary in the wild Highlands...

COURTING DESIRE
But Farah is no one's puppet. She possesses a powerful secret-one that threatens her very life. When being held captive by Dorian proves to be the only way to keep Farah safe from those who would see her dead, Dorian makes Farah a scandalous proposition: marry him for protection in exchange for using her secret to help him exact revenge on his enemies. But what the Blackheart of Ben More never could have imagined is that Farah has terms of her own, igniting a tempestuous desire that consumes them both. Could it be that the woman he captured is the only one who can touch the black heart he'd long thought dead?

Kerrigan Byrne has done many things to pay the bills, from law enforcement to belly dance instructor. Now she's finally able to have the career she'd decided upon at thirteen when she announced to her very skeptical family that she was going to "grow up to be a romance novelist." Whether she's writing about Celtic Druids, Victorian bad boys, or brash Irish FBI Agents, Kerrigan uses her borderline-obsessive passion for history, her extensive Celtic ancestry, and her love of Shakespeare in almost every story.

Kerrigan lives with her husband on the coast of Washington State's Olympic Peninsula in a Victorian-era town almost frozen in time. When she's not writing, you might find her on the beach with her dogs, lounging at a local vineyard or brewery, or buying things she doesn't need at antique stores.

Her novels with St. Martin's Press include the Victorian Rebels series (starting with The Highwayman) and Devil You Know series (which begins with How To Love A Duke in Ten Days).

“A passionate, lyrical romance that takes your breath away. From the first page, you'll fall in love.” —Elizabeth Boyle, New York Times Bestseller