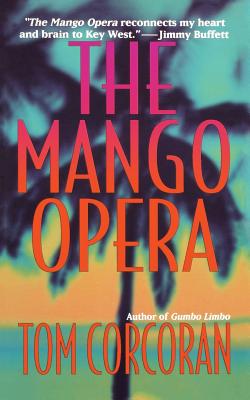 This is book number 1 in the Alex Rutledge Mysteries series.

Although he prefers magazine work, freelance photographer Alex Rutledge won't turn down an occasional crime scene shoot for the City of Key West Police Department. But when a string of murders takes his viewfinder into strangely familiar territory, Alex's mellow island lifestyle shatters. One after another, someone is killing women who have intimately crossed Alex Rutledge's path. Maybe it's a coincidence. Maybe it's a conspiracy. Or maybe he's crazy. But the connection marks Alex as the prime suspect in a case so hot it's drawn in the county sheriff, the FBI, and the Bureau of Alcohol, Tobacco, and Firearms. In a desperate race to save his name and his life, Alex dives into a one-man search for the dark, sweltering truth beneath a case that's pounding toward meltdown, in The Mango Opera by Tom Corcoran.

Tom Corcoran has been a bartender, disc jockey, screenwriter, Navy officer and journalist. He co-wrote the Buffett hits "Fins" and "Cuban Crimes of Passion." He is the author of Gumbo Limbo, Bone Island Mambo, and other Alex Rutledge mysteries. He lives in the Lower Keys, Florida.

"With its sure feel for the Key West that resides beneath the tourist facade and a quirky, hard-edged rhythm pulsing beneath the surface calm, this debut deserves a wide and welcoming audience."—Publishers Weekly