Under the Broken Sky (Hardcover) 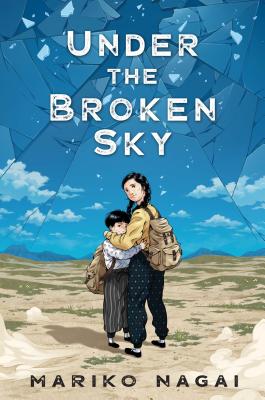 "Necessary for all of humankind, Under the Broken Sky is a breathtaking work of literature."—Booklist, starred review

Twelve-year-old Natsu and her family live a quiet farm life in Manchuria, near the border of the Soviet Union. But the life they’ve known begins to unravel when her father is recruited to the Japanese army, and Natsu and her little sister, Cricket, are left orphaned and destitute.

In a desperate move to keep her sister alive, Natsu sells Cricket to a Russian family following the 1945 Soviet occupation. The journey to redemption for Natsu's broken family is rife with struggles, but Natsu is tenacious and will stop at nothing to get her little sister back.

Literary and historically insightful, this is one of the great untold stories of WWII. Much like the Newbery Honor book Inside Out and Back Again by Thanhha Lai, Mariko Nagai's Under the Broken Sky is powerful, poignant, and ultimately hopeful.

Mariko Nagai is the author of Under the Broken Sky and Dust of Eden as well as several books of poetry and fiction for adults. She has received the Pushcart Prize in both poetry and fiction, as well as many other accolades. She is an associate professor of creative writing and Japanese literature at Temple University, Japan Campus, in Tokyo, where she is also the director of research.

"Under the Broken Sky is a story of hope and resilience during one of history's tragic forced migrations. Mariko's beautiful free verse reveals the emotional impact on a child and her family."— Margarita Engle, Newbery Honor-winning author of The Surrender Tree

"Published for middle-grade readers but necessary for all of humankind, Under the Broken Sky is a breathtaking work of literature."—Booklist, starred review

"Nagai writes in verse with both a detached hesitancy, as if looking at the story from a distance, and a deep understanding of the sisters’ pain through rich imagery that poetry so often allows. Echoing the hardships and redemption of many novels about World War II, this well-timed story about a lesser-known group of refugees adds an important chapter to the narrative of human oppression and survival."—School Library Journal

"[The story] is told with frank, unsentimental honesty and pain that lives in the space between words as much as in the words themselves. An afterword includes historical context on Manchuria in World War II and a reminder from the author that refugee families to this day leave their homes because they have no choice; this story offers readers a moving way to put themselves in such families’ shoes."—The Bulletin