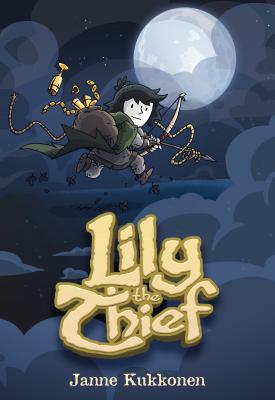 In Janne Kukkonen's swashbuckling fantasy graphic novel Lily the Thief, a young girl tries to make a name for herself in a secret and perilous society of thieves.

Lily is a young novice who dreams of being a master thief. That’s not easy when the Guildmaster of Thieves only assigns you the lowliest jobs: pick-pocketing, trespassing, and petty theft. But on one of these meager quests, Lily unearths a plot involving a mysterious cult and long-forgotten gods—a secret that could destroy the whole world.

Lily must fight to save the same people who have branded her an outcast. Can she use her cunning to put an ancient evil to rest?

Janne Kukkonen was born 1983 in Rovaniemi Finland. He spent his childhood reading and drawing comics and never even considered doing anything else when he grows up. He was an animator at Lybecker Institute in Raahe, has worked on various music videos, commercials and animated shorts, while writing his own scripts and stories on his free time. In 2014 he took a break from animation and started drawing his first graphic novel (later published in English as Lily the Thief), which became an award-winning smash hit. Now he works full time, writing and illustrating his own comics, and still wouldn't consider doing anything else when he grows up.

"Lily is a joy to follow as she wends her way through a male-dominated world...A fun page-turner sure to steal readers' attention." —Kirkus

"Lily, the youngest and only female character, stands out as a likeable, impetuous heroine whose somewhat flexible moral compass, skill, and quick thinking serve her well throughout increasingly difficult enterprises." —Publisher's Weekly