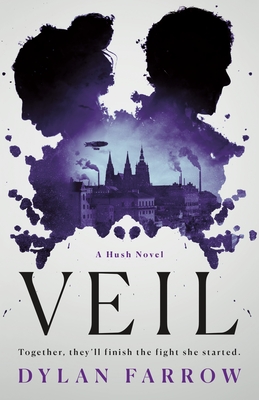 This is book number 2 in the The Hush Series series.

"[A] fast-paced and thought-provoking read that will keep readers on their toes until the intense end." - Young Adult Books Central

Dylan Farrow's Veil is the thrilling sequel to Hush, one of the most talked about YA fantasies of 2020.

Shae’s entire world has been turned upside down, and everything she’s ever believed is a lie. More determined than ever, she sets out to the mysterious land of Gondal—a place forbidden to mention and resigned to myth—in search of a dangerous magical book that could alter the fabric of the world.

Following the trail of Ravod, the boy she thought she knew and trusted, Shae discovers there is far more to the young man who stole the Book of Days than she ever realized. Together, with her friends, Mads and Fiona, and a newfound ally in her fierce former trainer, Kennan, Shae crosses the borders of the only home she’s ever had and into a world ruled not by magic, but technology and industry—one fraught with perils of its own.

In a world shrouded in lies, Shae is desperate for answers and to restore peace, but who will lift the veil?

DYLAN FARROW is a writer, mother, and activist for survivors of sexual assault. Growing up in both New York City and rural Connecticut, she spent countless hours drawing and writing for pleasure. After graduating from Bard College she found a position at CNN as a production assistant and later moved into graphic design. Soon, however, she felt that neither were her calling. Dylan returned to writing full time, exploring her love of YA fantasy. She is the author of Hush and Veil.

"A satisfying conclusion to an intriguing YA fantasy duology, VEIL is a fast-paced and thought-provoking read that will keep readers on their toes until the intense end." - Young Adult Books Central

"A captivating YA fantasy that kept me guessing all the way through... Highly recommend for fans of Tricia Levenseller, Cassandra Clare, and Amanda Hocking." - Young Adult Books Central

"In this cruel, beautiful realm, all reading and writing as well as select spoken words are strictly forbidden to the lower classes, while the elite of Montane, called Bards, are skilled in the powerful magic of Telling — a form of reality-altering sorcery based in the use of language... The novel speaks brilliantly to the many ills of 2020." - Entertainment Weekly

"[A] notable debut... The themes of quarantine and deadly disease in the context of current events are poignant; Farrow deftly demonstrates the power of language and education in the hands of the elite as a means for controlling others through propaganda. An intriguing female-driven dystopian fantasy for the same audience who loved the “Hunger Games” series." - School Library Journal

"Hush is a captivating tale of a girl's fight for her voice in a world where the only thing deadlier than power is the truth. Shae's search for answers in the dark will stay with readers long after the last page." - Margaret Owen, author of The Merciful Crow

"Farrow carefully crafts a layered world hiding dark secrets and gives us a fierce protagonist determined to unearth the truth-no matter the consequences. A compelling tale that's bound to grab your heart." - Swati Teerdhala, author of the Tiger at Midnight series