Foul is Fair: A Novel (Hardcover) 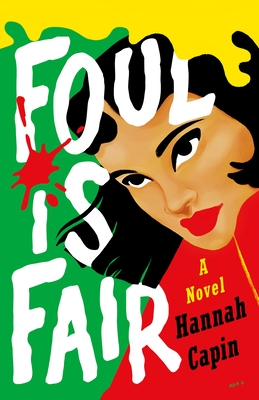 “Featuring a razor-sharp take on Lady Macbeth, this book is gripping. In the rise of antihero narratives in pop culture, this deserves to be up there with some of our favorites. It’s cathartic to see karma come around in the form of our protagonist, Jade. For Shakespeare fans, all of the nods to the original play are clever. Hannah Capin gets the balance just right between the source material and her own unique vision. As a tale of revenge, Foul Is Fair soars. No matter what happens in the book, we are always rooting for the girls.”
— Sofia Silva Wright, Phoenix Books Burlington, Burlington, VT

Hannah Capin's Foul is Fair is a bloody, thrilling revenge fantasy for the girls who have had enough. Perfect for fans of Karen M. McManus and A Good Girl's Guide to Murder. Golden boys beware: something wicked this way comes.

Jade and her friends Jenny, Mads, and Summer rule their glittering LA circle. Untouchable, they have the kind of power other girls only dream of. Every party is theirs and the world is at their feet. Until the night of Jade's sweet sixteen, when they crash a St. Andrew’s Prep party. The night the golden boys choose Jade as their next target.

They picked the wrong girl.

Sworn to vengeance, Jade transfers to St. Andrew’s Prep. She plots to destroy each boy, one by one. She'll take their power, their lives, and their control of the prep school's hierarchy. And she and her coven have the perfect way in: a boy named Mack, whose ambition could turn deadly.

Hannah Capin is the author of Golden Boys Beware (originally published as Foul is Fair) and The Dead Queens Club. She lives in Tidewater Virginia.

PUREWOW, "16 of the Best Young Adult Books Flying Off the Shelves This Holiday Season"

"This isn’t a how-to-murder-your-classmates manual; it’s a ferocious, frenzied reaction to a world that has, for too long, treated women as collateral damage in stories that have been deemed more important than theirs...Jade’s first-person narrative, steeped in rage and drenched, unapologetically, with gore, moves at a relentless pace." - Booklist (Starred Review)

"Rhythmic, propulsive prose drives this bloody retelling of Macbeth at a relentless pace all the way to its violent end...impossible to put down." - Kirkus

"An unapologetic, addictive tour de force that will leave readers entranced and empowered, a fantastically grafted story with an inevitable ending that you won’t soon forget." - The Nerd Daily

"This revenge fantasy is as brutal as it is beautiful...An absolutely gorgeous retelling, artistry on every page, Oscar-worthy if it were a film." - NPR.org

"This revenge fantasy told from the point of view of a rape survivor will shock and awe." - School Library Journal

"This book is not to be missed." - Paste

"Capin’s writing will seduce you with its beauty and then, when you least suspect it, slice you to the bone—just like Foul is Fair’s captivating, vicious, entirely unforgettable heroine, Jade." - Layne Fargo, author of Temper and co-host of Unlikeable Female Characters Podcast

"Fierce, vicious, and electric. If books had teeth, Foul Is Fair would have fangs. Capin's language glitters dark and her writing cuts deep. Revenge is a dish best served by this deliciously unapologetic coven." - Laurie Elizabeth Flynn, author of Firsts and Last Girl Lied To

“Vicious and beautifully brutal, Foul is Fair gives a sword to every girl who has ever been a victim and makes them a warrior. This book is pulls no punches and will make anyone think twice before uttering the phrase ‘just a girl’. An unapologetic feminist battle-cry that leaves you breathless and thirsting for vengeance.” - Sonia Hartl, author of Have a Little Faith in Me

"Foul is Fair delivers the story of a girl who snatches control back from a world that stole it away, through whatever means necessary. Hannah Capin deftly combines stunningly lyrical prose with the raw power of engulfing fury, sending a message written in blood. In a world where too many are forced into silence, this book roars back." - Sophie Gonzales, author of The Law of Inertia and Only Mostly Devastated

"Jade does what uncounted sexual assault survivors have dreamed of doing--she takes matters into her own hands. What ensues is part Buffalo Bill-style revenge fantasy, part diabolically well-planned manipulation, and it's all done in lyrical prose that feels dreamy and so much like Shakespeare. A gorgeous, scorchingly emotional novel perfect for fans of Mindy McGinnis' The Female of the Species or Courtney Summers' All the Rage." - Wendy Heard, author of Hunting Annabelle and The Kill Club and cohost of Unlikeable Female Characters podcast

“Foul is Fair is a clever reimagining of Macbeth centering a teenage Lady M. It’s a dark, brutal revenge fantasy, sharply feminist and brimming with melodic prose. Capin’s sophomore novel is bloody brilliant—exceedingly bloody, and every bit as brilliant.” - Dana Mele, author of People Like Us