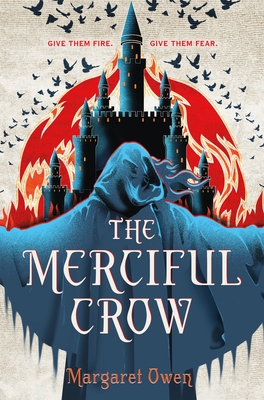 This is book number 1 in the The Merciful Crow Series series.

“In a world dominated by a strict caste system, the Crows struggle to get by, take care of their own, and survive the rampant prejudices of society. Within the first few pages, I was completely caught up in this fully realized world and compelling story where we follow Fie, a daring Crow full of fire and fury, as she tries to carve out a place for herself and her people against all odds. I loved the strong characters, endowed with real fears, desires, and relationships, and the heart-wrenching realities of their world, which often echoed the injustices and inequalities of ours.”
— Shoshana Smith, Flashlight Books, Belmont, CA

"Packed to the teeth with fresh worldbuilding and righteous fury...It's a ride that is wildly fun."—Emily A. Duncan, New York Times-bestselling author of Wicked Saints

One way or another, we always feed the crows.

Fie abides by one rule: look after your own. Her Crow caste of undertakers and mercy-killers takes more abuse than coin, but when they’re called to collect royal dead, she’s hoping they’ll find the payout of a lifetime.

When Crown Prince Jasimir turns out to have faked his death, Fie’s ready to cut her losses—and perhaps his throat. But he offers a wager that she can’t refuse: protect him from a ruthless queen, and he’ll protect the Crows when he reigns.

Hawk warrior Tavin has always put Jas’s life before his, magically assuming the prince’s appearance and shadowing his every step. But what happens when Tavin begins to want something to call his own?

Margaret Owen was born and raised at the end of the Oregon Trail and has worked in everything from thrift stores to presidential campaigns. She is the author of the instant Indie Bestseller Little Thieves, which received five starred reviews and was a Kids' Indie next pick and YALSA Best Fiction for Young Adults Selection. Her debut, The Merciful Crow duology, was an NPR Best Book of the Year, a Tor.com Best of the Year, and a YALSA Best Fiction for Young Adults Selection.

In her free time, she enjoys exploring ill-advised travel destinations, raising money for social justics nonprofits through her illustrated work, and negotiating a hostage situation with her monstrous cats. She lives in Seattle, Washington. You can find her across social media @what_eats_owls.

"One of the most exciting, exceptionally crafted fantasy debuts I've ever read. I did not want to leave this world! Absolutely breathtaking."—Claire Legrand, New York Times-bestselling author of Furyborn

"The Merciful Crow is an intense, romantic adventure with unforgettable magic and a ferocious heroine I'd gladly follow down a long, dark road."—Tessa Gratton, author of The Queens of Innis Lear

"A passionate blend of adventure and intrigue wrapped around strong worldbuilding... Memorable and filled with diverse characters with fluid sexualities and identities."—Publishers Weekly, starred review

"Elevated by a fresh dialect-tinged voice and creative world-building that calls to mind issues of today."—Booklist
"An excellent next read for fans of Leigh Bardugo, Kristin Cashore, and Moira Young."—School Library Journal