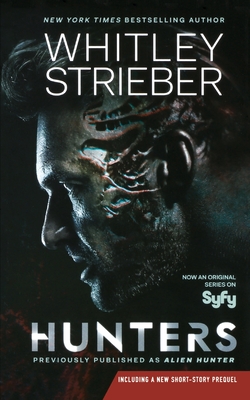 When police investigator Flynn Carroll’s wife disappears, he discovers that someone is abducting people and then framing the abductees as runaways. While Flynn's case files grow, Special Agent Diana Glass, a member of the most secret police unit on the planet, surreptitiously watches him work. Her agents are investigating the same enigmatic abductions and she wants Flynn on her team. Will Flynn’s desperate search for his wife come up empty? Or will it expose a conspiracy that reveals the most dangerous terrorists of all may not even be of this world?

WHITLEY STRIEBER is the author of over twenty novels and works of nonfiction among them The Wolfen, The Hunger, Communion, and The Coming Global Superstorm (with Art Bell), which was the inspiration for the film The Day After Tomorrow.

“Hunters engages you immediately and then surprises you on every page, taking the story to places I could never anticipate. . . . Strieber’s skills at creating complicated, interesting characters have never been better displayed.” —Larry Bond, New York Times bestselling author of Lash-Up

“Whitley Strieber knows how to scare us. Now he's taken his own frightening experiences documented in his bestseller Communion and built them into a compelling and must-read cops-and-aliens detective series.” —William J. Birnes, coauthor of the New York Times bestseller, The Day After Roswell

“If Stephen King teamed up with Lee Child, they couldn’t write a novel to match Hunters. Filled with high-tension suspense, blood-tingling chills and sizzling passion, Hunters is more than just a novel—it is the story Strieber was born to write.” —David Hagberg, New York Times bestselling author of The Fourth Horseman

“Scary, suspenseful, shocking, thrilling . . . Strieber’s a master of suspense and the undisputed master of the we-are-not-alone thriller, and in Hunters, he proves it yet again.” —William Martin, New York Times bestselling author of The Lincoln Letter