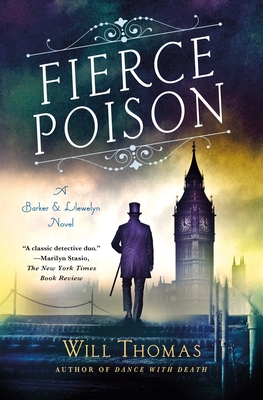 This is book number 13 in the A Barker & Llewelyn Novel series.

London, 1893, there is poisoner loose in the city, with deaths piling up, and private enquiry agents Cyrus Barker and Thomas Llewelyn are apparently his next target in Fierce Poison by Will Thomas.

Private Enquiry agent Cyrus Barker has just about seen it all—he's been attacked by assassins, his office has been bombed, and evil-doers have even nearly killed his dog. But never before has a potential client dropped dead in his office. When Roland Fitzhugh, Member of Parliament arrives to consult Barker and his partner Thomas Llewelyn, he falls to the floor, dead, upon entering. As they soon learn, he's been poisoned with a cyanide laced raspberry tart, and the adulterated tarts also take out an entire family in the East End. Labelled the Mad Pie Man by the press, Barker and Llewelyn are hired by former Prime Minister William Gladstone to find out who has targeted the House of Commons's newest member.

But before they can even begin, they find themselves the latest target of this mad poisoner—with Barker's butler poisoned with digitalis and dozens of diabolic traps discovered at their home. On the run from their unseen adversary, Barker and Llewelyn must uncover the threads that connect these seemingly random acts and stop the killer before they and their closest friends and family become the latest casualties.

WILL THOMAS is the author of the Cyrus Barker and Thomas Llewelyn series, including The Black Hand, The Hellfire Conspiracy, The Limehouse Text, To Kingdom Come, and the Shamus and Barry award-nominated Some Danger Involved. He lives with his family in Oklahoma.

"Superb... a gripping plot that builds to a clever and satisfying resolution." --Publishers Weekly (starred review)