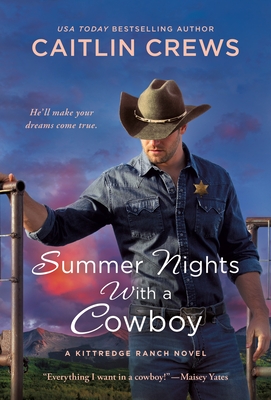 This is book number 3 in the Kittredge Ranch series.

He doesn’t believe in love…

Traveling nurse Janie Atwood has come to Cold River to uncover old family secrets and maybe, if she’s lucky, find a new home. That the gorgeous, glowering sheriff next door thinks her caring for his elderly neighbor is a nefarious scheme is a bonus. Having never been anything but a good girl, Janie finds Zack Kittredge’s simmering suspicion an excellent reason to try being a little dangerous instead…

She doesn’t believe in squandering it…

Sheriff Zack Kittredge is okay with being… intense. He takes his loner status as seriously as he takes his responsibilities to protect Cold River. And he thinks cheerful Janie might be a threat to the town. But the more he gets to know her, the more he faces the truth—she’s brighter than sunshine and he’s like a moth to her flame. When Janie suggests he could use a few charm school lessons, he surprises them both by accepting. He doesn’t need help. But it’s clear he might need her…

USA Today-bestselling, RITA-nominated, and critically-acclaimed author Caitlin Crews has written more than seventy-five books, including Frenemies, Princess from the Past, A Royal Without Rules, and Undone by the Sultan's Touch. She has won fans with her romance, Harlequin Presents, women's fiction, chick lit, and work-for-hire young adult novels, many of which she writes as Megan Crane (including the dystopian Viking romance Edge series). These days her focus is on contemporary romance in all its forms, from small town heat to international glamour, cowboys to bikers to military men and beyond.

Crews has taught creative writing classes in places like UCLA Extension's prestigious Writers' Program, gives assorted workshops on occasion, and attempts to make use of the MA and PhD in English Literature she received from the University of York in York, England. She currently lives in the Pacific Northwest with a husband who draws comics and animation storyboards, and their menagerie of ridiculous animals.

"This [...] romance is sure to fulfill some fantasies." - Publishers Weekly (starred review) on Summer Nights with a Cowboy

"The romance is red-hot. Fans will rejoice that Crews has two more rowdy Kittredge brothers to pair off in future installments." - - Publishers Weekly on Secret Nights with a Cowboy

"A thoroughly entertaining and deftly crafted romance novel by an expert in the genre." - Midwest Book Review on The Last Real Cowboy