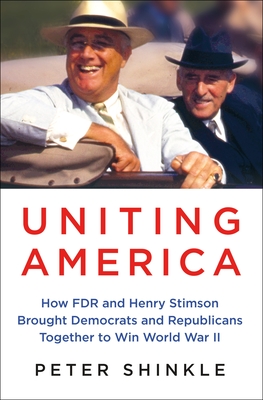 The untold story of the most crucial bipartisan alliance in United States history.

Roosevelt intended the appointments to build national unity. But building a coalition across party lines was a risky move that could have backfired politically. It also placed a bipartisan relationship at the center of America’s confrontation with global fascism. FDR’s Republican allies went on to play critical roles in leading the war effort, and many bills passed Congress during the war years with strong backing from both parties. Following Roosevelt’s death, Stimson continued to champion bipartisanship under President Truman in the closing chapter of the war. This alliance stands as a historic example of united leadership in a nation scarred by political division.

Uniting America is the first book to paint a full portrait of this extraordinary collaboration, tracing it back to its origins in 1933. Author Peter Shinkle reveals the true extent of bipartisanship during the war, including previously undisclosed information about Stimson’s work with 1940 Republican presidential nominee Wendell Willkie and other Republicans who supported FDR. This fascinating and deeply researched book is a must-read for anyone who believes America must once again unite to defend democracy at home and abroad.

PETER SHINKLE worked for 19 years as a reporter at various news organizations, including most recently the St. Louis Post-Dispatch. He covered the federal court system, and also wrote investigative stories on subjects ranging from improper disposal of radioactive waste to contamination spread by a lead mining company. He is the author of Ike's Mystery Man: The Secret Lives of Robert Cutler.

“In a time when our politics has become more polarized than ever, how refreshing to revisit an era when a Democratic president forged a pact with leading Republicans to defend democracy in a moment of extreme peril. With lucid writing and deep archival research, Peter Shinkle brilliantly reconstructs what he convincingly argues may have been the greatest bipartisan alliance in our nation’s history.”
—Michael Isikoff, coauthor of Russian Roulette

“Once upon a time, when it really mattered, America was led by statesmen who could rise above partisanship. Peter Shinkle has given us a very readable, at times moving account of two men who led America—and the free world—through its darkest hour.”
—Evan Thomas, author of Ike's Bluff and co-author of The Wise Men

“An elegant and timely book that showcases a remarkable collaboration…[Shinkle] illuminates a memorable example of how history can offer lessons for today.”
—Susan Eisenhower, author of How Ike Led

“Shinkle sheds light on a critical time in history when both parties united behind their president to fight the evil forces of Hitler’s fascism. My hope as an American first, and Republican second, is that we will come together anew to solve the significant problems facing our country and the world.”
—William Webster, former federal judge, former director of the CIA and the FBI

“Franklin Roosevelt valued Henry Stimson as a competent administrator and straight-talking adviser, but also as a symbol of national unity during wartime…In this meticulously researched and trenchantly argued book, Shinkle sheds fresh light on an impactful partnership.”
—Michael Birkner, professor of history at Gettysburg College, author of The Worlds of James Buchanan and Thaddeus Stevens

"Stuffed with detail yet fluidly written, this is an expert study of wartime politics and the value of bipartisanship."
—Publishers Weekly

"Shinkle seamlessly combines the account of the FDR, Stimson, and Knox partnership with a rich narrative of triumphs and setbacks at home and on the battlefield...Recent wartime histories go beyond battles; Shinkle takes this trend to the next level in this fresh and politically relevant history."
—Booklist