The Long Alliance: The Imperfect Union of Joe Biden and Barack Obama (Hardcover) 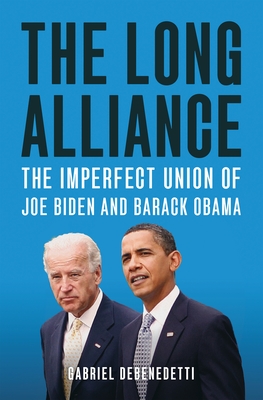 Delving far deeper than the simplistic “bromance” narrative that’s long held the public eye, The Long Alliance reveals the past, present, and future of the unusual partnership, detailing its development, its twists and turns, its ruptures and reunions, and its path to this pivotal moment for each man’s legacy.

The true story of this relationship, from 2003 into 2022, is significantly more layered and consequential than is widely understood. The original mismatch between the veteran Washington traditionalist and the once-in-a-generation outsider has transformed repeatedly in ways that have molded not just four different presidential campaigns and two different political parties, but also wars, a devastating near-depression, movements for social equality, and the fight for the future of American democracy. The bond between them has been, at various times over the past two decades, tense, affectionate, nonexistent, and ironclad — but it has always been surprising. Now it is shaping a second presidential administration, and the future of the world as we know it.

Gabriel Debenedetti is the national correspondent at New York Magazine, where he writes about politics and national affairs. Previously, he covered politics for Politico and Reuters. His writing has also appeared in the New York Times Book Review, the Economist, Politico Magazine, and the New Republic. A New Jersey native, he graduated from Princeton University.

“[A] careful chronicling and insightful examination…[Debenedetti] is an excellent reporter and he provides a satisfyingly detailed account of the 2020 presidential campaign from both leaders’ perspectives.”
—The New York Times Book Review

“[A] treat… readers interested in behind-the-scenes details and vividly depicted moments from the past two decades of American politics, starring some of its most pivotal players, will be riveted.”
—The Washington Post

“Gabriel Debenedetti masters the crosscurrents of the Democratic party as well as relations between two presidents.”
—The Guardian

“Gabriel Debenedetti is simultaneously one of the smartest and most dogged reporters in Washington, and he has pieced together a master narrative of the complex relationship between two presidents whose partnership held together through a series of economic and political crises. The Obama-Biden dynasty has won three of the last four presidential elections, and Debenedetti’s story reveals the whole scope of its birth, growth, and struggle to save democracy.”
—Jonathan Chait, New York Times bestselling author of Audacity: How Barack Obama Defied His Critics and Created a Legacy That Will Prevail

“Gabriel Debenedetti's reporting on the Biden-Obama relationship is a tour-de-force, weaving together the political and personal dynamics that have bonded these two presidents and, at times, led to significant tension. It is a gripping tale of power in modern America and how it really works, told by someone who knows the players and inside stories better than anyone.”
—Robert Costa, #1 New York Times bestselling co-author of Peril

“What progress is possible in a country defined by partisan stalemate? This is the immersive, indelible account of a twenty-year working friendship almost precisely coincident with the emergence of a new and often maddening American politics. Barack Obama and Joe Biden assumed their presidencies with different political strengths, instincts, and ideals, but though each believed he could outmaneuver opposition and achieve lasting generational change, each also quickly found himself contemplating legacies which, though historic, could seem painfully piecemeal—including to the presidents themselves.”
—David Wallace-Wells, New York Times bestselling author of The Uninhabitable Earth

“Just when you thought there was nothing else to say about Biden and Obama, Washington's most thoughtful observer, Gabriel Debenedetti, sheds new light on the friendship, alliance and differences between the two men who helped shape modern America. The Long Alliance delivers illuminating insights and intimate, riveting, sometimes unsparing details, and takes you inside the corridors of power and the struggle for America's future.”
—Kim Ghattas, author of New York Times bestselling The Secretary and New York Times 2020 Notable Book Black Wave

“Gabriel Debenedetti has written the definitive account of one of the most important—and, until now, poorly understood—relationships in 21st Century American politics. With rich new reporting, Debenedetti details the machinations that helped Joe Biden to parlay a hopeless presidential bid into a spot on Barack Obama’s 2008 ticket and a level of national prominence he’d never before known. More importantly, he illustrates the rocky and uneven evolution of their partnership during the Obama presidency. We see a genuine personal bond develop and deepen even as the president remains skeptical, dismissive even, of his handpicked vice president’s actual political talent – arguably leading to the twist of history that makes Donald Trump president and leaves it to Biden, four years later, to prove to the world – and to his former boss – just what he is capable of.”
—Steve Kornacki, NBC News National Political Correspondent and author of The Red and the Blue

“[A]n engrossing study of the political and personal relationship between Joe Biden and Barack Obama…Doggedly reported and clear-eyed about its subjects’ strengths and weaknesses, this is an illuminating portrait of a consequential political partnership.”
—Publishers Weekly

“Carefully constructed…A readable portrait of a political partnership that may be seen as one of the most productive in U.S. history.”
—Kirkus Reviews