Crossing the Line: A Fearless Team of Brothers and the Sport That Changed Their Lives Forever (Paperback) 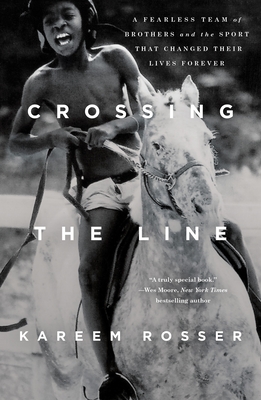 "A marvelous addition to the literature of inspirational sports stories." - Booklist (Starred Review)

An inspiring memoir of defying the odds from Kareem Rosser, captain of the first all-black squad to win the National Interscholastic Polo championship. "Crossing the Line will not just leave you with hope, but also ideas on how to make that hope transferable” (New York Times bestselling author Wes Moore).

Born and raised in West Philadelphia, Kareem thought he and his siblings would always be stuck in “The Bottom”, a community and neighborhood devastated by poverty and violence. Riding their bicycles through Philly’s Fairmount Park, Kareem’s brothers discover a barn full of horses. Noticing the brothers’ fascination with her misfit animals, Lezlie Hiner, founder of The Work to Ride stables, offers them their escape: an after school job in exchange for riding lessons.

What starts as an accidental discovery turns into a love for horseback riding that leads the Rossers to discovering their passion for polo. Pursuing the sport with determination and discipline, Kareem earns his place among the typically exclusive players in college, becoming part of the first all-Black national interscholastic polo championship team—all while struggling to keep his family together.

Crossing the Line: A Fearless Team of Brothers and the Sport That Changed Their Lives Forever is a story of the bonds of brotherhood, family loyalty, the transformative connection between man and horse, and forging a better future from impossible odds.

Kareem Rosser is from Philadelphia, PA. He received a BA in economics from Colorado State University (CSU). While at CSU, he led his collegiate polo team to a national polo championship. At the same time, he was honored as the Intercollegiate polo player of the year. After graduation, Kareem began working as a financial analyst at an asset management firm. Also, he serves as the Executive Director of a non-profit fundraising arm called Friends of Work to Ride.

* Featured on CBS's This Morning Saturday and NBC's Today Show *

"A marvelous addition to the literature of inspirational sports stories. It's an occasionally heartbreaking but ultimately uplifting coming-of-age story about the bonds of brotherhood and the unique healing powers capable of being generated between humans and horses." - Booklist (Starred Review)

"Vulnerability is exactly what gives Crossing the Line its strength; Rosser not holding anything back is the key quality that makes this first-time author’s words worth your time... if anybody should be considered the face of American polo, it’s Kareem Rosser." - InsideHook

"[A] poetically spun tale of championship...Rosser's aspirational tale, though full of sorrow and hardship, is one that readers will cheer." - Kirkus

“Of all the stories around Polo that I have experienced in my career, this is by far the most inspiring." - Nacho Figueras

"Crossing the Line is truly a special book. It will not just leave you with hope, but also ideas on how to make that hope transferable. Kareem's remarkable story is one that should be read and understood by all.” - Wes Moore, Rhodes Scholar, Former White House Fellow, and New York Times bestselling author of The Other Wes Moore