The White House Plumbers: The Seven Weeks That Led to Watergate and Doomed Nixon's Presidency (Paperback) 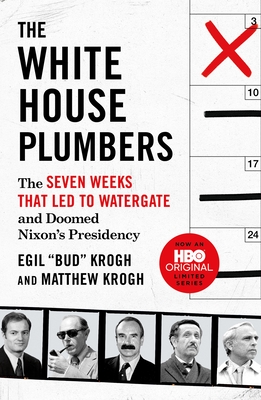 SOON TO BE A FIVE-PART HBO SERIES, STARRING WOODY HARRELSON AND JUSTIN THEROUX

The true story of The White House Plumbers, a secret unit inside Nixon's White House, and their ill-conceived plans stop the leaking of the Pentagon Papers, and how they led to Watergate and the President's demise.

On July 17, 1971, Egil “Bud” Krogh was summoned to a closed-door meeting by his mentor—and a key confidant of the president—John Ehrlichman. Expecting to discuss the most recent drug control program launched in Vietnam, Krogh was shocked when Ehrlichman handed him a file and the responsibility for the Special Investigations Unit, or SIU, later to be notoriously known as “The Plumbers.”

The Plumbers’ work, according to Nixon, was critical to national security: they were to investigate the leaks of top secret government documents, including the Pentagon Papers, to the press. Driven by blind loyalty, diligence, and dedication, Krogh, along with his co-director, David Young, set out to handle the job, eventually hiring G. Gordon Liddy and E. Howard Hunt, who would lead the break-in to the office of Dr. Fielding, a psychiatrist treating Daniel Ellsberg, the man they suspected was doing the leaking. Krogh had no idea that his decisions would soon lead to one of the most famous conspiracies in presidential history and the demise of the Nixon administration.

Egil "Bud" Krogh (1939-2020) made headlines as a Nixon Administration official who went to prison for his role in what would lead to the Watergate scandal. He was a Navy veteran, a lawyer in Seattle, Washington, special assistant to the president, and under secretary of Transportation. In 1973, he pled guilty to “conspiracy against rights of citizens” for his role in the 1971 break-in at the office of Dr. Lewis Fielding and served four and a half months in prison. After serving his time, he rebuilt his reputation, resuming his law practice and speaking and writing on ethics. He was Senior Fellow on Ethics and Leadership at the Center for the Study of the Presidency and Congress and Counselor to the Director at the School for Ethics and Global Leadership in Washington, D.C.

Matthew Krogh (1970 - ) is a professional change maker focused on issues of climate change, fossil fuels, and policy. Mostly based in Bellingham, Washington, he has spent his career in nonprofit activism at various organizations, and has worked as a freelance writer, ranger, and geographic analyst. He currently co-owns Warthog Information Systems, a company focused on using geographic information to make the world a better place. He is grateful for the opportunity to amplify his dad's important life lessons through co-authoring The White House Plumbers, along with its earlier iteration Integrity.

"Reflective . . . . A slender but thoughtful memoir by one of the foot soldiers of Watergate." —Kirkus Reviews

"General readers on both sides of the political aisle will welcome this instructional, conscience-stricken account." —Library Journal (starred review)

"A concise and important view of one domino that would topple Richard Nixon’s Presidency . . . a heartfelt mea culpa—soon to be an HBO miniseries—emphasizing that redemption is always possible and integrity not entirely lost, even in the wake of historic scandal." —Booklist