Liberalism and Its Discontents (Paperback) 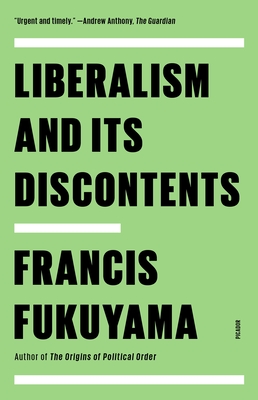 Classical liberalism is in a state of crisis. Developed in the wake of Europe’s wars over religion and nationalism, liberalism is a system for governing diverse societies that is grounded in fundamental principles of equality and the rule of law. It emphasizes the rights of individuals to pursue their own forms of happiness free from encroachment by government.

It’s no secret that liberalism hasn’t always lived up to its own ideals. In the United States, many have long been denied equality before the law, excluded from the category of full human beings worthy of universal rights. Only recently has this definition expanded to include, to varying degrees, women, African Americans, LGBTQ+ people, and other historically marginalized groups. As the renowned political philosopher Francis Fukuyama shows in Liberalism and Its Discontents, the principles of liberalism have also, in recent decades, been pushed to new extremes by both the right and the left: neoliberals have made a cult of economic freedom, and progressives have focused on identity over human universality as central to their political vision. The result, Fukuyama argues, has been a fracturing of our civil society and increasing peril to our democracy.

In this succinct, clear account of our current political discontents, Fukuyama offers an essential defense of a revitalized liberalism for the twenty-first century.

Francis Fukuyama is the Olivier Nomellini Senior Fellow at Stanford University's Freeman Spogli Institute for International Studies. He has previously taught at the Paul H. Nitze School of Advanced International Studies of Johns Hopkins University and at the George Mason University School of Public Policy. He was a researcher at the RAND Corporation and served as the deputy director in the State Department's policy planning staff. He is the author of The End of History and the Last Man, Trust, and America at the Crossroads: Democracy, Power, and the Neoconservative Legacy. He lives with his wife in California.

"[Liberalism and Its Discontents is] a rare thing: [an] academic treatise that may actually have influence in the arena of practical politics . . . Fukuyama writes with a crystalline rationality."
—Joe Klein, New York Times Book Review

"Liberalism and its Discontents is a sterling book . . . Powerful and well-executed."
—Seamus Flaherty, Quillette

"An eloquent and eminently sensible defense of liberal freedom and pluralism that should be read and debated by leaders and activists across the ideological spectrum. This clearly written and concisely argued book highlights Fukuyama’s lifelong examination of the political theories and systems that shape human history—and in turn get shaped by its developments.”
—John Halpin, Washington Monthly

"A liberalism under siege from right and left gets a measured defense in this incisive treatise . . . lucid [and] insightful . . . [A]n authoritative and accessible diagnosis of how liberalism went wrong and how it can reclaim its best impulses." —Publishers Weekly

"Urgent and timely . . . A vital strength of this slim, elegant book is that it is crystalline in its definitions, even while acknowledging the complexities of practice . . . A brilliantly acute summary of the way some aspects of liberal thought have consumed themselves." —Andrew Anthony, The Guardian