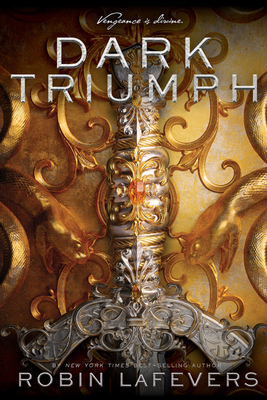 This is book number 2 in the His Fair Assassin series.

“Those who loved Grave Mercy will be thrilled with this follow-up, told from the point of view of Sybella, a girl with a dark past and many secrets. Once again LaFevers delivers a historically rich novel, with detailed research blending perfectly with just a touch of magic. A stunning sequel that, though it reads well on its own, will leave readers hungry for the final installment of this thrilling trilogy.”
— Debbie Barr, 4 Kids Books, Inc., Indianapolis, IN

Sybella's duty as Death's assassin in 15th-century France forces her return home to the personal hell that she had finally escaped. Love and romance, history and magic,vengeance and salvation converge in this thrilling sequel to Grave Mercy in the critically acclaimed, New York Times best-selling His Fair Assassin series, perfect for fans of Sarah J. Maas, Kristin Cashore, and Victoria Aveyard.

The convent returns Sybella to a life that nearly drove her mad. Her father’s rage and brutality are terrifying, and her brother’s love is equally monstrous. And while Sybella is a weapon of justice wrought by the god of Death himself, He must give her a reason to live. When she discovers an unexpected ally imprisoned in the dungeons, will a daughter of Death find something other than vengeance to live for?

Return to the world of the critically acclaimed His Fair Assassin series in this "romantic fantasy with a vengeance" and sequel to Grave Mercy that takes reader’s deep into the wicked world of corrupt politics, dangerous love, and hard-won vengeance.

Robin LaFevers, author of the New York Times best-selling His Fair Assassin books, was raised on fairy tales, Bulfinch’s mythology, and nineteenth-century poetry. It is not surprising that she grew up to be a hopeless romantic. She was lucky enough to find her one true love, and is living happily ever after with him in California. Visit her online at robinlafevers.com and on Twitter @RLLaFevers.

* "LaFevers is that wonderful sort of storyteller who so completely meshes events, descriptions, and characters that readers get lost in the world she's concocted. It's a place where history mingles with mystery and love is never expected."
—Booklist, starred review

* "The prose's beauty inspires immediate re-reads of many a sentence, but its forward momentum is irresistible. An intricate, masterful page-turner about politics, treachery, religion, love and healing."
—Kirkus, starred review

"Personal where Grave Mercy was political and comprehensive, this story focuses tightly on Sybella as she seeks vengeance upon the many men who have wronged her. . . . Her romantic relationship with the imprisoned warrior unfolds with a sweet tenderness that romance fans will relish."
—Bulletin of the Center for Children's Books

"An expertly crafted novel, with deep characters and an interesting plot that is, at the same time, fantastic, yet realistic. LaFevers has agazin used great artistry to create an excellent tale for both young adult and adult audiences."
—VOYA, 4Q 4P S

* "As with the first book, LaFevers has filled the pages of her novel with adventure, and the pace is electrifyingly fast. The characters are well drawn, and even the secondary figures have dimension. Sybella's quick-thinking and fearless approach to terrifying personal and political situations renders her an incredibly strong protagonist with whom readers will identify."
—School Library Journal, starred review —