Kristy and the Walking Disaster (The Baby-Sitters Club #20) (Paperback) 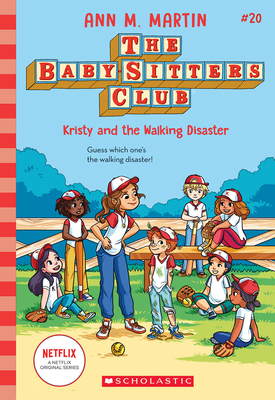 America's favorite series returns with a new look and a Netflix tv show.

They're lean, they're mean, they're the pride of Stoneybrook. Who are they? They're Kristy's Krushers!

When Kristy sees how much her little brothers and sister want to play on a softball team, she starts a rag-tag team of her own. Maybe Kristy's Krushers aren't world champions (how could they be, with Jackie Rodowsky, walking disaster, playing for them?), but nobody beats them when it comes to team spirit.

Now Bart's Bashers have challenged the Krushers to a real live game. It's bad enough that the Bashers truly ARE lean and mean -- but what's worse is that Kristy has a crush on the Bashers' coach. A crush with a capital C!

Ann M. Martin is the creator of The Baby-sitters Club, which has more than 190 million books in print, making it one of the most popular series in the history of publishing. Her novels include A Corner of the Universe (a Newbery Honor Book), Belle Teal, Here Today, A Dog's Life, On Christmas Eve, and the Main Street and Family Tree series, as well as the much-loved collaborations P.S. Longer Letter Later and Snail Mail No More, with Paula Danziger. Ann lives in upstate New York.