The Iliad & the Odyssey: 2-Volume Box Set Edition (Other) 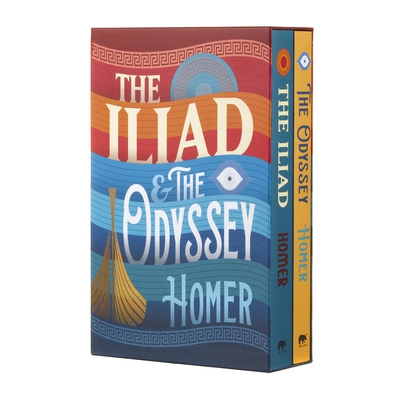 This handsome slipcased edition brings together two of the most celebrated classical works of literature, The Iliad and The Odyssey.

The legendary poet of Greek antiquity Homer is surrounded by almost as much myth as the characters of his two epic poems The Iliad and The Odyssey. As two of the oldest extant works of Western literature they formed the foundations for Ancient Greek culture, and have been read, translated, adapted and enjoyed across the globe since the 8th century BC.

The Iliad takes place in the final weeks of the long-fought Trojan War. As the Greeks fight to reclaim the beautiful Helen, King Agamemnon seizes Briseis, the concubine of Achilles. In disgust the legendary warrior abandons the conflict, taking his men with him. The Odyssey joins the heroic Odysseus on his epic and tumultuous journey home following the fall of Troy. Having angered the sea-god Poseidon he and his men are beset by obstacles including a man-eating Cyclops, deadly storms, and a witch who transforms her enemies into pigs. The translations presented in this wonderful collection are easily accessible prose editions translated by highly-esteemed authors. The Iliad is translated by the late-Victorian novelist Samuel Butler, and The Odyssey by adventurer - Lawrence of Arabia - T.E. Lawrence.

Sources from classical antiquity posit Homer as a blind bard from what is now Anatolia, Turkey, living in the late 8th or early 7th Century BC. There is no doubting the significance of their contribution to Western literature. Samuel Butler (1835-1902) was an English novelist, essayist, and critic whose satire Erewhon (1872) foreshadowed the collapse of the Victorian illusion of eternal progress. He is known for his translations of the Iliad and Odyssey which are still consulted today. The Way of All Fresh (1903), his autobiographical novel, is generally considered his masterpiece). T.E. Lawrence (1888-1935) was a British scholar and military officer, also known by the names T.E. Shaw and Lawrence of Arabia. He is best known for his legendary war activities in the Middle East during World War I and for his book on the conflict The Seven Pillars of Wisdom. He is also celebrated as one of the major letter writers of his generation and for his prose translation of the Odyssey.