The Revenge of the Radioactive Lady (Paperback) 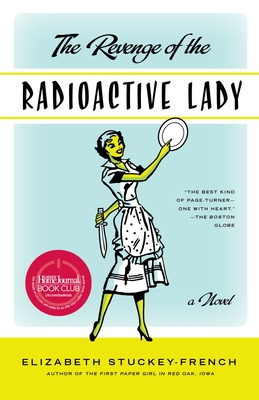 A Chicago Tribune Best Book of the Year

Marylou Ahearn is going to kill Dr. Wilson Spriggs. In 1953, the good doctor gave her a radioactive cocktail without her consent, and Marylou has been plotting her revenge ever since. When she discovers his whereabouts in Florida, she hightails it to Tallahassee, moves in down the block from where he resides with his daughter, Caroline, and begins the tricky work of insinuating herself into his life. But she has no idea what a nest of yellow jackets she’s stumbled into. Spriggs is senile, his daughter’s on the verge of collapse, and his grandchildren are a mess of oddballs, leaving Marylou wondering whether she’s really meant to ruin their lives … or fix them.

Elizabeth Stuckey-French is the author of the novel Mermaids on the Moon and the story collection The First Paper Girl in Red Oak, Iowa. Her short fiction has also appeared in the Atlantic Monthly, Gettysburg Review, Southern Review, Five Points, and other literary journals. She lives in Tallahassee, Florida, where she teaches fiction writing at Florida State University.

“The best kind of page-turner—one with heart.” —The Boston Globe

“The Revenge of the Radioactive Lady, is the sort of book that one devours quickly and then thinks, ‘I’ll have another just like that, please.’ The trouble, of course, is that it’s difficult to find another book quite like this one.” —The New Yorker


“Charmingly off-kilter. . . . A smart and improbably cheerful tale about family that’s actually quite sweet at its core.” —People

“It’s impossible not to love a novel that starts out with a 77-year-old woman planning cold-blooded murder, especially when the old lady in question is as charming and funny as Stuckey-French’s Marylou Ahearn.” —Dan Chaon, author of Await Your Reply

“One funny story. . . . Stuckey-French makes her domestic satire work precisely by not backing away from its darkness—and also by giving us characters who are complex and believable enough to stay with even when the going gets weird.” —St. Petersburg Times

“[A] darkly funny novel that manages to deliver some sharp observations on the fruits of vengeance along the way.” —The Denver Post

“If you liked the film Little Miss Sunshine, you’ll absolutely love The Revenge of the Radioactive Lady! Not only whacked-out and wonderful, this novel is secretly very damn serious, too, as well as up-to-the-minute contemporary and compelling. Elizabeth Stuckey-French brings her completely original voice and vision to the theme of family—and revenge. I couldn’t put it down.” —Lee Smith, author of The Last Girls and On Agate Hill

“The Revenge of the Radioactive Lady is populated exclusively by what used to be called oddballs, and therein lies its strength. . . . What happens along the way isn’t predictable at all.” —The New York Times Book Review

“Were it not for Elizabeth Stuckey-French’s puckish voice, The Revenge of the Radioactive Lady could have been a drama. Luckily for us, it’s not. . . . Surprisingly chipper as the neurotic and loveable cast turns what could have been a macabre tale into a wildly compulsive read.” —BookPage

“How wonderful it is to find a writer who perfectly captures the spirit of this crazy age:  that bizarre and irreducible mix of high and low culture, of tragedy and comedy.  This is no mean literary feat.  And Elizabeth Stuckey-French achieves it brilliantly. Not only a wildly entertaining novel, an important one.” —Robert Olen Bulter, Pulitzer Prize-winning author of Hell

“Stuckey-French expertly builds each character, even, eventually, the mysterious doctor’s. The family’s oddities are aftereffects of larger circumstances—Asperger’s syndrome, guilt, and resentment—but the author sticks with a light, humor-infused voice throughout the book.” —The Christian Science Monitor

“Mixing the suburban angst of Tom Perrotta with the snarky humor of Carl Hiaasen, Stuckey-French has written a page-turner that is thoughtful, amusing, and nearly impossible to put down.”—Library Journal (starred)

“Revenge of the Radioactive Lady is an often hilarious, always entertaining novel, but Elizabeth Stuckey-French has achieved much more. With remarkable wisdom and empathy, she has given us a profound meditation on what it means to be a family and the human heart’s complex, sidling path toward forgiveness.” —Ron Rash, bestselling author of Serena

“A goofy spoof based on a serious bioethical issue. One could feel guilty for being so effectively entertained.” —The Star Ledger

“One amazing ride. Stuckey-French has chosen an avenging 77-year-old retired schoolteacher as her entrance into a kind of J.D. Salinger dysfunctional family. Throw in some Roald Dahl, and you get Stuckey-French’s unique brand, an episode-filled combination of suspense and oddity with some realistic family drama as an underpinning.” —The Asheville Citizen-Times

“Elizabeth Stuckey-French mines all the great stuff: love, heartache, family, revenge.  And then she offers a gift, one we desperately need: She lays bare what truly makes the quirky, necessary heart of forgiveness tick.  Grace and hard won wisdom flash through these funny, wonderful pages, leaving me to ruminate on three words: luminous, real, unforgettable.” —Connie May Fowler, author of Before Women had Wings