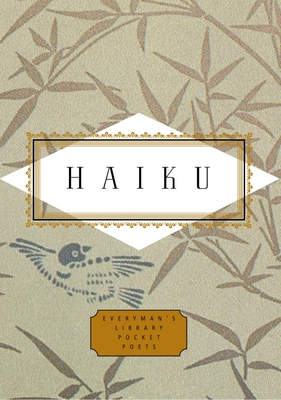 Simple yet capable of great complexity, the haiku is a tightly structured verse form that has a remarkable power to distill the essence of a moment keenly perceived. For centuries confined to a small literary elite in Japan, the writing of haiku is now practiced all over the world by those who are fascinated by its combination of technical challenge, expressive means, and extreme concentration.

This anthology brings together hundreds of haiku by the Japanese masters–Basho, Issa, Buson, Shiki–with superb examples from nineteenth- and twentieth-century writers. The pioneering translator R. H. Blyth believed that the spirit of haiku is present in all great poetry; inspired by him, the editor of this volume has included lines from such poets as Wordsworth, Keats, Tennyson, Thoreau, and Hopkins, presented here in haiku form. Following them are haiku and haiku-influenced poems of the twentieth century–from Ezra Pound’s “In a Station of the Metro” to William Carlos Williams’s “Prelude to Winter,” and from the irreverence of Jack Kerouac to the lyricism of Langston Hughes. The result is a collection as compact, dynamic, and scintillating as the form itself.

Peter Washington is the editor of many of the Everyman's Library Pocket Poets, including Love Poems, and is the author of Madame Blavatsky's Baboon: A History of the Mystics, Mediums, and Misfits Who Brought Spiritualism to America.