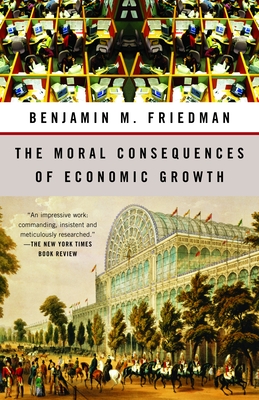 From the author of Day of Reckoning, the acclaimed critique of Ronald Reagan’s economic policy (“Every citizen should read it,” said The New York Times): a persuasive, wide-ranging argument that economic growth provides far more than material benefits.

In clear-cut prose, Benjamin M. Friedman examines the political and social histories of the large Western democracies–particularly of the United States since the Civil War–to demonstrate the fact that incomes on the rise lead to more open and democratic societies. He explains that growth, rather than simply a high standard of living, is key to effecting political and social liberalization in the third world, and shows that even the wealthiest of nations puts its democratic values at risk when income levels stand still. Merely being rich is no protection against a turn toward rigidity and intolerance when a country’s citizens lose the sense that they are getting ahead.

With concrete policy suggestions for pursuing growth at home and promoting worldwide economic expansion, this volume is a major contribution to the ongoing debate about the effects of economic growth and globalization.

Benjamin M. Friedman is the William Joseph Maier Professor of Political Economy and former chairman of the department of economics at Harvard University, where he has taught since 1972. The author of several scholarly works; his first trade book, Day of Reckoning: The Consequences of American Economic Policy Under Reagan and After, was awarded the George S. Eccles Prize, awarded annually by Columbia University for excellence in writing about economics. A former investment banker, he has consulted for the Board of Governors of the Federal Reserve System and individual Federal Reserve banks. He has worked with the National Bureau of Economic Research, the National Science Foundation Subcommittee on Economics, and the Congressional Budget Office. Professor Friedman has written for the New York Times, The Wall Street Journal, and The New York Review of Books.

“An impressive work: commanding, insistent and meticulously researched.” –The New York Times Book Review“Hugely provocative.” –The Washington Post“A major work. . . . This kind of reasoned analysis is precisely what is necessary to put the United States back on the right track.” –Foreign Affairs“Absorbing. . . . A thorough, historically detailed, accessible exploration.” –The Economist“Friedman has scored a dead-center hit on the critical question: Why do we value economic growth? . . . Provide[s] a new framework and language for discussing economic growth, one that’s useful for economists, politicians, and business leaders alike.” –BusinessWeek“One extreme belief about economic growth is that it is self-evidently its own reward. The opposite extreme is the belief that economic growth is wasteful and dehumanizing. Along comes Ben Friedman to argue calmly, thoroughly and convincingly that rising incomes create an environment favorable to democracy, tolerance and solidarity, while stagnation does the reverse. But government policy matters for the actual outcome, and understanding matters for the choice of policy. This is a strong case, and Friedman lays it out with a wealth of historical and international detail.”–Robert Solow“Benjamin Friedman goes beyond and above the usual run of economic discussion. He is concerned not only with how the economy functions but also with how it serves the common good. The Moral Consequences of Economic Growth will stand as a major contribution to social well-being. It could not be more timely and welcome.”–John Kenneth Galbraith, author of The Affluent Society “Friedman’s book renews the proud tradition of Adam Smith’s Theory of Moral Sentiments. He provides a stunning, comprehensive view of economic growth and proposes a positive outlook of its moral consequences. Debatable, yes, but an argument one has to confront in assessing public policy toward globalization and aid to developing countries.”–Daniel Bell, author of The Cultural Contradictions of Capitalism “The most important studies of economic growth and development are those that go beyond the numbers and illuminate performance and its consequences by moral concerns and goals. This wider range is what gives the works of such giants as Adam Smith and John Stuart Mill their timeless relevance; and it is what promises to give this new study by Benjamin Friedman its transcendental importance. He conveys this larger wisdom with a clarity and intellectual passion that make this book a nascent classic, a ‘must read.’ ”–David S. Landes, author of The Wealth and Poverty of Nations “This book reminds us all of a truly important moral issue–the likely effects of economic growth or stagnation on society’s tolerance, its fairness, and its democratic values. Ben Friedman establishes yet again why he is one of America’s best economists.” –Peter G. Peterson, chairman, Council on Foreign Relations“Reading this book is an experience in discovering meaning in our economic lives. Friedman insightfully connects our sense of moral purpose with the business activities that figure so largely in our everyday endeavors. A fascinating view of world history.”–Robert J. Shiller, author of Irrational Exuberance“This powerful book achieves the rare feat of transforming economics into a social science. Friedman’s argument is both convincing and fascinating to read.”–Peter L. Bernstein, author of Against the Gods “Friedman demonstrates how economic growth promotes the social, political, and economic well-being of a citizenry, and he refutes the popular myth that economic growth is inconsistent with the development of human liberty and dignity. Fascinating and well documented.”–James J. Heckman, University of Chicago,2000 Nobel Laureate in Economics“This splendid book, written on a broad canvas that transcends parochial American concerns, is an important work that draws on insights from history and economics to argue that growth is a friend, not a foe, of prosperity and much else. It is a tour de force.” –Jagdish Bhagwati, author of In Defense of Globalization