Madness Under the Royal Palms: Love and Death Behind the Gates of Palm Beach (Paperback) 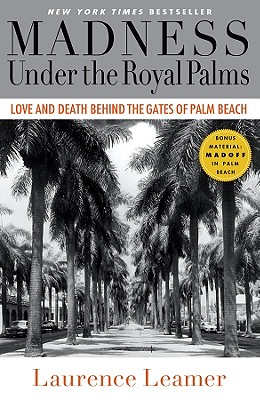 The New York Times bestselling history of the glamour and debauchery of the ultra-wealthy Palm Beach community--from The Breakers to Trump's Mar-a-Lago.

For more than a hundred years, Palm Beach has been an exclusive and exotic universe of wealth and privilege in America. And until Bernie Madoff's Ponzi scheme devastated its eternally sunny world, the reality of this affluent enclave has rarely been exposed to outsiders.

Now, in Madness Under the Royal Palms, resident insider Laurence Leamer reveals the secrets and scandals of this South Florida island via a cast of characters that includes social climbers, trophy wives, sugar daddies, glamorous widows and their "escorts," sociopathic multimillionaires, and elegant society queens. Dive into the unbelievable true story of love, lust, money, and murder in a uniquely American paradise.

Laurence Leamer is the author of twelve books, including Make-Believe: The Life of Nancy and Ronald Reagan, The Kennedy Women, The Kennedy Men, King of the Night: The Life of Johnny Carson and Fantastic: The Life of Arnold Schwarzenegger. A member of the Peace Corps and a graduate of the Columbia School of Journalism, Leamer was on staff at Newsweek, and has written for the New York Times Magazine, Harper's, Playboy, and many other publications.

"Leamer, who's lived in Palm Beach since '94, knows his stuff. . . . Madness offers buckets of heart-warming Schadenfreude for all."—The Washington Post

"Now, as unflinching as Dante, the irrepressible Laurence Leamer . . . has turned his attention to the society in which he luxuriates most winters. Social lepidopterist that he is, in the 300-plus pages of Madness Under the Royal Palms Leamer pins out that gaudy, conflicted community like cornered butterflies fluttering, hectic and doomed."—St. Petersburg Times

"Leamer meticulously paints the kind of frenzied desire to belong to the club, literally and metaphorically, that led people to abandon most principles."—Bloomberg