The Order Has Been Carried Out: History, Memory, and Meaning of a Nazi Massacre in Rome (Palgrave Studies in Oral History) (Paperback) 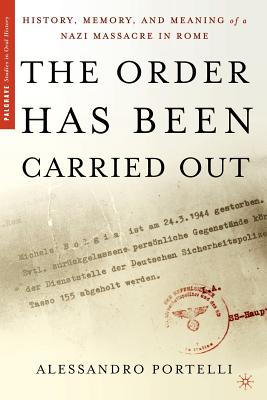 On March 24, 1944, Nazi occupation forces in Rome killed 335 unarmed civilians in retaliation for a partisan attack the day before. Portelli has crafted an eloquent, multi-voiced oral history of the massacre, of its background and its aftermath. The moving stories of the victims, the women and children who survived and carried on, the partisans who fought the Nazis, and the common people who lived through the tragedies of the war together paint a many-hued portrait of one of the world's most richly historical cities. The Order Has Been Carried Out powerfully relates the struggles for freedom under Fascism and Nazism, the battles for memory in post-war democracy, and the meanings of death and grief in modern society.

Alessandro Portelli is Professor of American Literature at the University of Rome-La Sapienza. He is the author of The Death of Luigi Trastulli: Form and Meaning in Oral History; The Text and the Voice: Speaking, Writing, and Democracy in American Literature; The Battle of Valle Giulia: Oral History and the Art of Dialogue; and The Order Has Already Been Carried Out: History, Memory and Meaning of a Nazi Massacre in Rome.