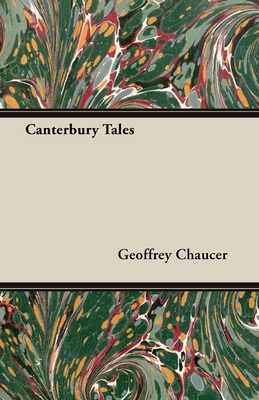 CANTERBURY TALES BY GEOFFREY CHAUCER INTRODUCTION GETS born on the edge of a new era stand in peculiar danger of being misunderstood and depreciated by the generations that follow. Since time never stands still, and one age is forever melting into the next, any poet has to take a rather desperate chance of .appealing to readers beyond his own day. There is always the possibility, to be sure, that he may be more highly esteemed than by his contempo rariesa faint hope that has buoyed up many who were destined to drown in the waters of oblivion but this does not often happen. The inevitable revaluation usually marks the poet down to a lower figure. Sometimes he has to wait a few centuries be tore he is understood and appreciated again. John Donne is an example in point. If the shift of ideas and taste can be so upsetting, what is likely to be the fate of a poet who happens to write while his medium q expression is in process of change? Suppose the form of verbs and nouns is alteref suppose some pronouns go out and others come in, suppose the habits of speech and tlft meaning of words become very different within a century or sq after he dies. His chances of continuing fame will bdby that much more reduced. If he continues in high repute, illnust be because of qualities in his work that can be seen and appreciated despite difficulties of language as well as changes of opinion and taste, Geoffrey Chauceg met triumphantly both theser tests. HeKad perfected from the speech of educatscl folk in London at his time a poetical instrument a flexible and melodious, as capable of expressing a wide range of feelings and ides, as any English author has had at his comman But the speech of London changed very rapidly after his death in 1400, A century later the language was on the verge of becoming what we call modern English, and in fifty years more it was the native tongue of Spenser and Shakespeare. At the same time the ideas of men, together with the political and social fabric in which xhey found expression, changed with equal rapidity. Medieval England became Tudor England. Chaucers language had by this time become archaic, as hard to understand as it is in the twentieth century, or indeed harder, since we have better editions with the notes and glossaries that scholars have industriously com piled. The codes according to which he thought and felt and acted had become oldfashioned, too, though not so remote as they are to us. Yet men like Spenser and Sidney, who loved poetry, recognized Chaucers worth. No change of speech or fashion in that century, or any other, has been able to obscure it. The men and women whom his imagination created have kept alive, even when they have had tt be seen darkly through texts that falsified almost every line he wrote.