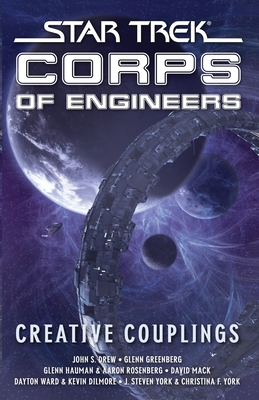 These are the voyages of the U.S.S. da Vinci. Their mission: to solve the problems of the galaxy, one disaster at a time. Starfleet veteran Captain David Gold, along with his crack Starfleet Corps of Engineers team led by former Starship Enterprise™ engineer Commander Sonya Gomez, travel throughout the Federation and beyond to fix the unfixable, repair the irreparable, and solve the unsolvable.

The S.C.E.'s missions don't always go as planned -- repairing the weather grid on the resort planet Risa turns into a deadly first contact, constructing an industrial complex on a nonaligned world leads to some startling revelations about the financier behind it, diverting a runaway ship could spell death for the crew the da Vinci didn't even know was there, and a planet in a box proves a more valuable prize than anyone could have imagined -- but their greatest challenge comes much closer to home...

Captain Gold's granddaughter Esther is marrying Khor, son of Lantar, a Klingon politician. Now Gold faces what may be the greatest challenge of his career: officiating the first-ever Klingon-Jewish wedding!