The Lampshade: A Holocaust Detective Story from Buchenwald to New Orleans (Paperback) 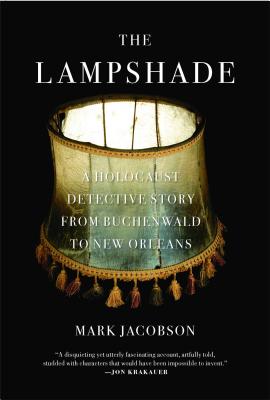 Few growing up in the aftermath of World War II will ever forget the horrifying reports that Nazi concentration camp doctors had removed the skin of prison ers to make common, everyday lampshades. In The Lampshade, bestselling journalist Mark Jacobson tells the story of how he came into possession of one of these awful objects, and of his search to establish the origin, and larger meaning, of what can only be described as an icon of terror.

From Hurricane Katrina–ravaged New Orleans to Yad Vashem in Jerusalem to the Buchenwald concentration camp to the U.S. Holocaust Memorial Museum, almost everything Jacobson uncovers about the lampshade is contradictory, mysterious, shot through with legend and specious information. Through interviews with forensic experts, famous Holocaust scholars (and deniers), Buchenwald survivors and liberators, and New Orleans thieves and cops, Jacobson gradually comes to see the lampshade as a ghostly illuminator of his own existential status as a Jew, and to understand exactly what that means in the context of human responsibility. One question looms as his search progresses: what to do with the lampshade—this unsettling thing that used to be someone?

Mark Jacobson, a contributing editor at New York magazine, is a frequent contributor to The Village Voice, National Geographic, Natural History Magazine, Men’s Journal, Esquire, and other publications. He is the author of 12,000 Miles in the Nick of, The KGB Bar Nonfiction Reader, and Teenage Hipster in the Modern World, and the novels, Gojiro and Everyone and No On. He lives in Brooklyn.

“A disquieting yet utterly fascinating account, artfully told, studded with characters that would have been impossible to invent.” —Jon Krakauer

“Antic, improbable and resonant . . . an entangling meditation on not merely Nazi atrocities but on the nature of authenticity.” —Dwight Garner, The New York Times

“Jacobson's writing is . . . both gonzo and fiercely, fiercely smart. The Lampshade is an awfully good book and it's exceptionally heartfelt.” —Bryan Curtis, The Daily Beast

“God only makes a few genius reporters, and even in that small company, Mark Jacobson is one of a kind. He can follow his nose so deep into a story that every page is a surprise.” —Richard Ben Cramer