He Forgot to Say Goodbye (Paperback) 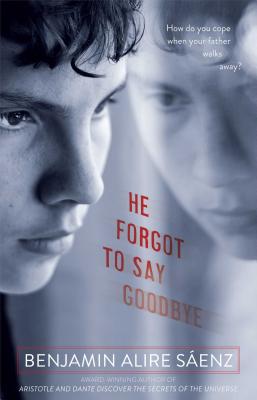 On the surface, Ramiro Lopez and Jake Upthegrove couldn’t live more different lives. Ram is Mexican-American, lives in the poor section of town, and is doing his best to keep his mother sane while his brother fights off a drug-induced coma. Jake is a WASP who drives a nice car, lives in a mansion, and has a mother who drinks a bit too much and a step-father who cheats on her. But there is one point, one issue, where their lives are exactly the same; their fathers walked out on them when they were just young boys. And at this convergence, Ram and Jake see how everything in their lives is just a little bit similar, because they both blame everything that goes wrong on the one thing they actually have in common. A heartfelt novel from an award-winning author.

Benjamin Alire Sáenz is an author of poetry and prose for adults and teens. He was the first Hispanic winner of the PEN/Faulkner Award and a recipient of the American Book Award for his books for adults. He is the author of Aristotle and Dante Discover the Secrets of the Universe, which was a Printz Honor Book, the Stonewall Award winner, the Pura Belpré Award winner, the Lambda Literary Award winner, and a finalist for the Amelia Elizabeth Walden Award, and its sequel, Aristotle and Dante Dive into the Waters of the World. His first novel for teens, Sammy and Juliana in Hollywood, was an ALA Top Ten Book for Young Adults and a finalist for the Los Angeles Times Book Prize. His second book for teens, He Forgot to Say Goodbye, won the Tomás Rivera Mexican American Children’s Book Award, the Southwest Book Award, and was named a New York Public Library Book for the Teen Age. He lives in El Paso, Texas.

"Sáenz's skill with language is such that it makes me as a reader slow down to savor the sentences...Many readers will see themselves in these two young men who manage to confront the demons in their lives and survive." - Teri Lesesne, professor, Sam Houston State University

"He Forgot to Say Goodbye is a story about what it is to become a man...I have, in fact, now spent a lot of quality time with Ramiro and Jake and can say that this one is right up there with my all-time favorite YAs." - Richie Partington, Richie's Picks