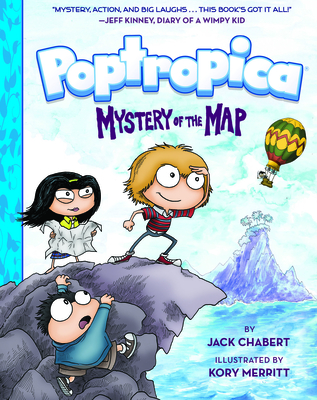 Based on a concept by Wimpy Kid author Jeff Kinney comes Poptropica, a brand-new graphic novel adventure series by Jack Chabert and Kory Merritt. In Mystery of the Map, Oliver, Mya, and Jorge take a ride in a hot-air balloon, only to crash-land on an unknown island filled with extinct animals and a horde of angry Vikings. Welcome to Poptropica, an uncharted group of islands whose existence is hidden from the rest of the world. As the three friends embark on a perilous search for a way home, they quickly discover the shocking reason they were brought there—something that threatens the very existence of Poptropica and their ability to ever make it off the island!

Jack Chabert is a game designer for Poptropica, the creator and author of Eerie Elementary, and, writing under a different name, the author of more than 25 titles including licensed books for Adventure Time, Regular Show, Uncle Grandpa, and Steven Universe. Chabert lives in New York with his wife.

Kory Merritt is the co-creator of Poptropica comics and the author/illustrator of the weekly comic strip Brockport, the online comic The Lost Side of Suburbia, and The Dreadful Fate of Jonathan York. He lives in Spencerport, New York.

Jeff Kinney is a #1 New York Times bestselling author of the Diary of a Wimpy Kid series and the Awesome Friendly Kid series. He is a six-time Nickelodeon Kids’ Choice Award winner for Favorite Book and has been named one of Time magazine’s 100 Most Influential People in the World. He spent his childhood in the Washington, D.C., area and moved to New England, where he and his wife own a bookstore named An Unlikely Story.

"Bright, animated colors and zippy cartoonlike action make for an easily accessible first offering that provides just enough exposition to hook young readers and keep them seeking out subsequent adventures. A peppily paced adventure yarn sure to delight fans of the franchise, both old and new."

"Based on the online role-playing game developed by the ever-popular Jeff Kinney, this new adventurecomic series gets off to a flying start... The lively art mirrors that on the website, featuring bold, colorful panels and characters with giant heads and expressive eyes. Fans of the online game will delight in reading a story about one of Poptropica’s many islands, and newcomers will have no trouble falling into this adventure."
— Booklist

"Fans of the game will recognize the pop-eyed humans, the vibrant islands, and the quest-focused storylines, but even readers who have never heard Poptropica will get the fun right away... Both game buffs and newbies will likely find this the perfect amount of exposition and action, and they'll cheerfully await the next big adventure for this clever, unruly trio who face nose-picking Vikings and imminent peril with equal looks of dismay."
— Bulletin of the Center for Children's Books