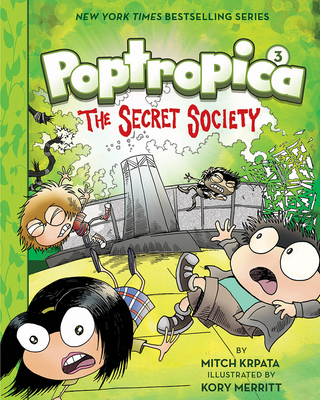 In this exciting third installment of the Poptropica series, we find Mya, Oliver, and Jorge in the custody of a secret society whose mission is to protect and preserve Poptropica—a mysterious, uncharted island world. These Protectors, as they call themselves, believe that any outside interference with the islands of Poptropica could have catastrophic results on the course of history in the real world. As if things aren’t bad enough, Octavian has finally claimed possession of the confounding map, thwarted the society’s attempts to capture him, and is determined to alter the time line. The trio must join forces with the Protectors and find Octavian before he can go through with his evil plot, or all of human history might be changed—or worse—destroyed!

Kory Merritt is the co-creator of Poptropica comics and the author/illustrator of the weekly comic strip Brockport, the online comic The Lost Side of Suburbia, and The Dreadful Fate of Jonathan York. He lives in Spencerport, New York.

Mitch Krpata is a writer and producer for the Poptropica website and the author of the Island Creator Kit. He lives in Boston.

Jeff Kinney is a #1 New York Times bestselling author of the Diary of a Wimpy Kid series and the Awesome Friendly Kid series. He is a six-time Nickelodeon Kids’ Choice Award winner for Favorite Book and has been named one of Time magazine’s 100 Most Influential People in the World. He spent his childhood in the Washington, D.C., area and moved to New England, where he and his wife own a bookstore named An Unlikely Story.