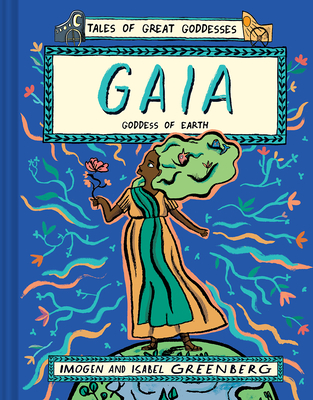 A spunky, feminist take on the myth of Gaia, the Greek goddess of the Earth

Long before the age of the Olympian gods, Gaia created the world in all its beauty. But from Gaia also came the Titans, who ran wild and free through this world—until her husband Ouranos turned on Gaia and declared himself the ruler of all she’d created. Her son Cronus then rose to power, but soon he too became hungry for more power—so much so that he swallowed his own children. But Gaia managed to hide the youngest son, Zeus, from Cronus. Zeus grew up and defeated Cronus and saved his brothers and sisters. Gaia thought this would be the end of all the needless war, but Zeus was not satisfied—he swore to rid the world of anyone who challenged his power. Gaia was furious. She wanted no part in the world of Zeus. She would not fight his destruction with more destruction. It might be too late for Zeus, but it wasn’t too late for the mortals—or for the earth itself. Follow the goddess of earth through her struggles with gods and mortals as she discovers her strength and eventually finds the peace she has always longed for.

Tales of Great Goddesses are graphic novels that bring the stories of some of the most powerful and fascinating mythical goddesses to life!

Isabel Greenberg is an award-winning illustrator, comic artist, and writer. Her graphic novels have received starred reviews, won the Best Book Award at the British Comic Awards, and won the Observer/Cape/Comica Graphic Short Story Prize, among other praise. Isabel has worked with a variety of clients, including the Guardian, Nobrow Press, The National Trust, and the New York Times. She lives in London and enjoys illustrating all things historical. Imogen Greenberg loves writing history books and myths for children. When not writing, she works in arts and theater administration. She lives in London.

Isabel Greenberg is an award-winning illustrator, comic artist, and writer. She illustrated the picture book A Hundred Billion Trillion Stars, which won the Mathical Book Prize, was named a Boston Globe Horn Book Award honor, and “best of the year” by Amazon, Space.com, and the Planetary Society, and has over 60,000 copies in print, along with Power Up and The Ocean in Your Bathtub. Her graphic novels, including the New York Times bestseller The Encyclopedia of Early Earth, have received starred reviews, won the Best Book Award at the British Comic Awards, and won the Jonathan Cape/Observer/Comica Graphic Short Story Prize, among other praise. Greenberg has worked with a variety of clients, including the Guardian, Nobrow Press, The National Trust, and the New York Times. She lives in London and enjoys illustrating all things historical. This is her first author-illustrated picture book.

"Snarky rendition of an old tale, highlighting both sisterhood and a cogent contemporary message."
— Kirkus Reviews