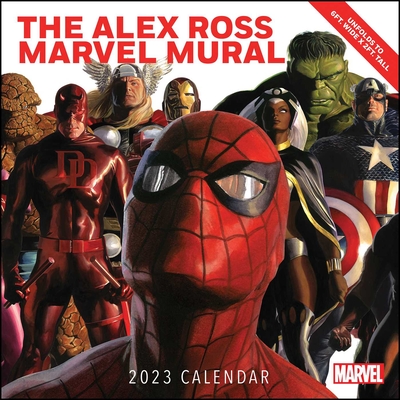 From Spider-Man and the Hulk to Doctor Strange and Wolverine, 35 of your favorite Marvel Comics Super Heroes come alive in this 2023 calendar featuring an over-sized mural by Alex Ross—one of most respected and influential artists working in comics. Originally commissioned for Marvel’s New York City offices, the mural presents the Marvel Super Heroes painted in the award-winning, breathtaking style that made Alex Ross famous. As realistic as any on the silver screen, these classic heroes appear as never seen before.

Alex Ross studied at the American Academy of Art in Chicago, then honed his craft as a storyboard artist before entering the field of comics. In 1993, Marvels—his groundbreaking miniseries with writer Kurt Busiek—created a wider acceptance for painted comics. In 1996 he and writer Mark Waid produced the equally successful Kingdom Come for DC Comics, and followed those up with an extensive series of work including magazine and album covers, as well as a poster for the Academy Awards. Ross has also been the subject of two monographs written and designed by Chip Kidd—Mythology: The DC Comics Art of Alex Ross and Marvelocity: The Marvel Comics Art of Alex Ross. His latest book is The Alex Ross Marvel Comics Poster Book (Abrams ComicArts, Spring 2021).