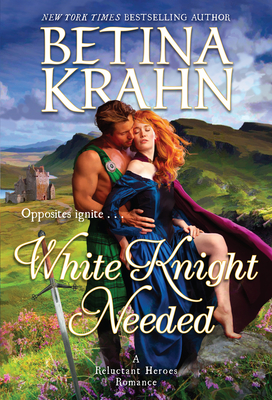 This is book number 2 in the Reluctant Heroes series.

Brimming with romance and adventure, the second Victorian-era romance in New York Times bestselling author Betina Krahn’s thrilling new Reluctant Heroes series reveals the hero in every man, as a gentleman swept up by police in a morality raid feels honor-bound to rescue a woman who was also in the wrong place at the wrong time…

Just as Barclay Howard declares himself finished with the idea of true love and in pursuit of the more pragmatic “free love,” he is thrust into another sort of commitment: guardian to his little nephew. Barclay hasn’t a clue about children and now must quickly relocate to his family estate. But when he is swept up in the raid of a free love gathering and jailed with a lovely, cultured, innocent bystander, things become more complicated—or perhaps simpler…

Norah Capshaw was fleeing a brute when she found herself swept into a lecture hall, jailed, and jobless. Without a penny or a relative to her name, she has sworn never rely on others, much less look for a hero. But she can’t resist Barclay’s offer of a position as tutor to his nephew. In fact, despite her distrustful nature, it’s hard to resist Barclay. Soon, with their attraction growing, and a mysterious man still following her, the two embark on a journey into the southern uplands of Scotland—and into the heart of a great love neither expected.

Can these two fight the temptation of the forced proximity or will they rescue each other’s bruised hearts instead? Filled with Betina’s signature sparkling wit, the battle of wills between these two lovers is sure to captivate readers!

Betina Krahn is a New York Times bestselling author of more than 30 historical and contemporary romances. Her works have won numerous industry awards, including the Romantic Times Lifetime Achievement Award for Love and Laughter. Visit her on the web at BetinaKrahn.com.