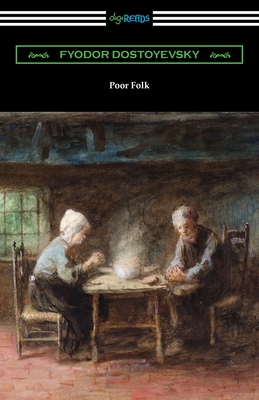 Financial difficulties resulting from an extravagant lifestyle and excessive gambling led Fyodor Dostoevsky to pen his first novel "Poor Folk". First published in 1846, "Poor Folk" is the story of impoverished cousins Varvara Dobroselova and Makar Devushkin. The two live in run-down apartments across the street from each other in St. Petersburg. Through a series of letters to each other we learn of the suffering, humiliation, and isolation that results from their poverty. Varvara Dobroselova is the daughter of cruel father and severely depressed mother. Dobroselova falls in love with the poor student Pokrovsky who has been tutoring her, but when he falls severely ill their courtship ends in tragedy. Devushkin works as a copyist where he is treated badly by his coworkers. The two bond over a love of literature exchanging books with each other. Eventually a series of fortunate circumstances improve their relative conditions but these changes draw the two apart from each other. An important social work that highlighted the struggles of the lower classes in 19th century Russia, "Poor Folk" received widespread acclaim upon its original publication and launched the career of one of Russia's most distinguished novelists. This edition is printed on premium acid-free paper and follows the translation of C. J. Hogarth.