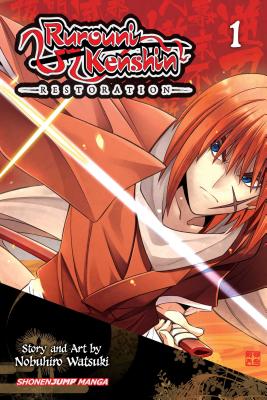 This is book number 1 in the Rurouni Kenshin: Restoration series.

A condensed retelling of the beloved samurai tale--one of the best-selling manga series of all time—released in conjunction with a new live-action movie.

During the violent upheaval of the Bakumatsu era, Hitokiri Battosai was a feared and ruthless assassin. But now that the Meiji Restoration has begun to heal the wounds of civil war, Battosai has taken up a new name…and a new calling! He is now Himura Kenshin , a rurouni wanderer who has vowed to only draw his sword to protect those in need.

But not everyone is pleased with Kenshin’s new direction, and enemies from his dark past have vowed to bring him down!