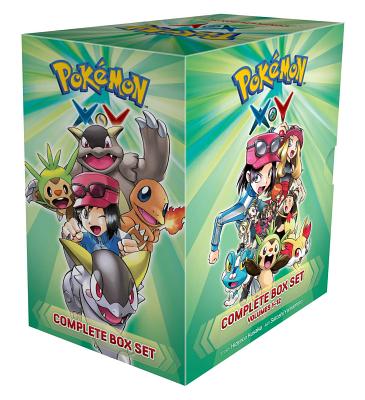 Contains all 12 volumes of the Pokémon X•Y manga series and a collectible full-color poster!

Awesome adventures inspired by the best-selling Pokémon X and Y video games! All your favorite Pokémon game characters jump out of the screen into the pages of this action-packed manga!

X was a Pokémon Trainer child prodigy. But now he's depressed and hides in his room avoiding everyone—including his best friend Y. An attack on their hometown by Legendary Pokémon Xerneas and Yveltal, led by Team Flare, forces X outside… Now what?

The complete series of Pokémon X•Y in a collector’s box set!

Child prodigy X is constantly in the spotlight after winning the Pokémon Battle Junior Tournament. Burnt out by fame, X retreats to his room, secluding himself from the world...that is, until the nefarious Team Flare attacks!