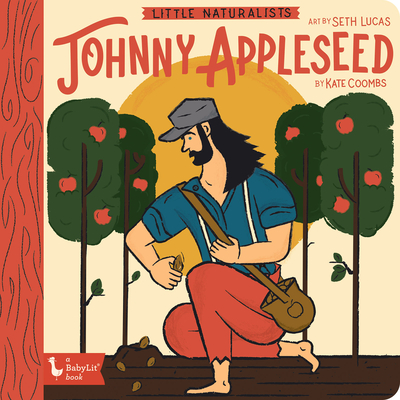 Introduce your brilliant baby to the American icon Johnny Appleseed.

John Chapman, known as "Johnny Appleseed," planted apple tree nurseries all over Pennsylvania, Ontario, Ohio, Indiana, Illinois, and West Virginia. He believed nobody should ever harm a living thing, so he advocated for animal rights, became a vegetarian, and planted seeds instead of grafting tree branches like most other orchardists. Kate Coombs and Seth Lucas recreate Johnny Appleseed's adventures for young readers, encouraging them to Be Adventurous and to Be Kind to every person, animal, and plant they meet.

Kate Coombs is an award-winning author of original fairy tales, poems, middle-grade fantasy novels, and picture books, including the critically acclaimed Water Sings Blue, which won the Lee Bennett Hopkins Poetry Award for 2012, and seven books in the bestselling BabyLit series. She lives in Bountiful, Utah.

Seth Lucas is an illustrator and designer with a BFA in graphic design. He is the co-creator of Ello There Outdoors selling prints and accessories supporting the National Parks and outdoors. He lives in Indianapolis, Indiana, with his wife and daughter.