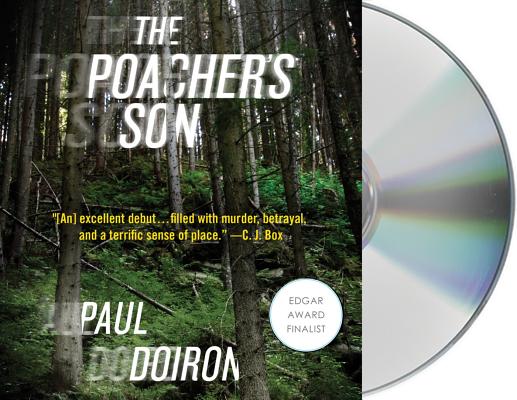 This is book number 1 in the Mike Bowditch Mysteries series.

“Martin Bowditch is a Maine Game Warden but his life is not a bucolic paradise. The deep woods contain the same crime and violence that pervade the rest of society and Martin must combat it along with a simmering family history that threatens to overwhelm him in this suspenseful, outstanding debut.”
— Bill Cusumano, Nicola's Books, Ann Arbor, MI

Set in the wilds of Maine, this is an explosive tale of an estranged son thrust into the hunt for a murderous fugitive---his own father.

Game warden Mike Bowditch returns home one evening to find an alarming voice from the past on his answering machine: his father, Jack, a hard-drinking womanizer who makes his living poaching illegal game. An even more frightening call comes the next morning from the police: They are searching for the man who killed a beloved local cop the night before---and his father is their prime suspect. Jack has escaped from police custody, and only Mike believes that his tormented father might not be guilty.

Now, alienated from the woman he loves, shunned by colleagues who have no sympathy for the suspected cop killer, Mike must come to terms with his haunted past. He knows firsthand Jack's brutality, but is the man capable of murder? Desperate and alone, Mike strikes up an uneasy alliance with a retired warden pilot, and together the two men journey deep into the Maine wilderness in search of a runaway fugitive. There they meet a beautiful woman who claims to be Jack's mistress but who seems to be guarding a more dangerous secret. The only way for Mike to save his father now is to find the real killer---which could mean putting everyone he loves in the line of fire.The Poacher's Son is a sterling debut of literary suspense. Taut and engrossing, it represents the first in a series by Paul Doiron featuring Mike Bowditch.

John Bedford Lloyd, a graduate of Yale’s School of Drama, has appeared in a host of major motion pictures, including The Bourne Supremacy, Crossing Delancey, The Abyss, The Manchurian Candidate, and Philadelphia. His television credits include Suits, Pan Am, Law & Order, Spin City, and The West Wing. His critically-acclaimed audiobook narration includes reading for authors such as Michael Crichton, Nicholas Sparks, Paul Doiron, and Atul Gawande, among others.  In reviewing Lloyd’s performance in Better by Atul Gawande, AudioFile magazine declared, “John Bedford Lloyd's deep, rich voice delivers just the mix we look for in doctors--knowledgeable, authoritarian tones mixed with the warm, comforting style that characterizes a great bedside manner.”

“The plot moves swiftly in this ‘page turner,' but John Bedford Lloyd is adept at giving listeners time to adjust to changes of scene…Gripping action, characters to care about, well crafted plot, economical writing, and a moving ending will make this first novel one that demands sequels.” —SoundCommentary.com