Rip Van Winkle and The Legend of Sleepy Hollow (Paperback) 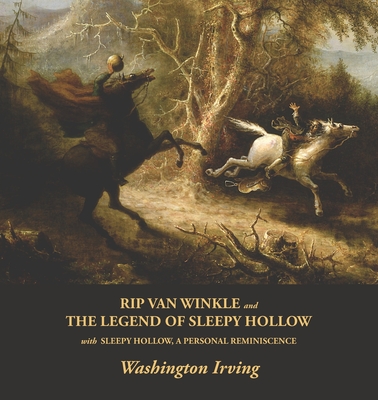 Written just after the American Revolution, Rip Van Winkle and The Legend of Sleepy Hollow are two thoroughly American tales of fantasy and the supernatural.

Rip Van Winkle follows the strange adventure of a Dutch-American villager in colonial America. He meets mysterious Dutchmen in the Catskill Mountains, imbibes their liquor, and falls asleep. He awakes twenty years later to a very changed world, having missed the American Revolution.

The Legend of Sleepy Hollow features Ichabod Crane, a schoolteacher who lives in a village on the Hudson River. A suggestible man, Ichabod believes the ghost stories about the place, particularly the tale of a headless horseman. When he begins courting the beautiful Katrina Van Tassel, a rival suitor, Brom Bones, begins playing tricks on the schoolmaster. Late one night as Ichabod rides home from Katrina's house, he is pursued by the legendary headless horseman. The specter hurls at him a round object that he takes to be a head but is later revealed to be a pumpkin. The schoolmaster is never seen in Sleepy Hollow again.

These two gothic masterpieces are among the earliest examples of American fiction with enduring popularity.