Beyond the XS and OS: Keeping the Bills in Buffalo (Excelsior Editions) (Hardcover) 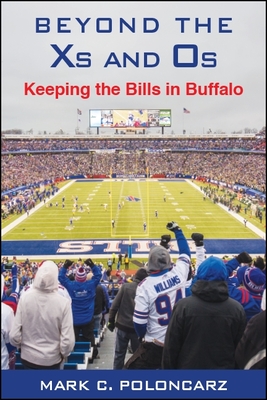 Beyond the Xs and Os is the previously unpublished story of how a long-term stadium lease was negotiated and signed by New York's Erie County, the state, and the Buffalo Bills football team. Mark C. Poloncarz, the elected executive of the community that owned the stadium, provides a rare glimpse into the long, difficult, but ultimately rewarding effort to successfully conclude negotiations between a National Football League (NFL) franchise, the NFL, and a multitude of players from the political arena, including Governor Andrew Cuomo and US Senator Chuck Schumer. Poloncarz discusses the financial side of sports and reveals how the county was able to navigate what proved to be often-turbulent waters. Complicating negotiations was an ongoing frenzy in the local news media, hungry for any news about the new lease, and Bills team owner Ralph C. Wilson Jr., who was ninety-two and had said the team would be sold upon his death, thereby possibly being relocated to another city. In the end, a new lease was signed and the Bills remained in Buffalo at a time when a number of similar sized communities watched their teams relocate to other cities in larger markets.

Mark C. Poloncarz is Erie County, New York's eighth county executive. Since taking office, Poloncarz has returned Erie County government to its core mission of serving the needs of its constituents in a common-sense, pragmatic manner that improves the lives of all, while also overseeing the economic turnaround of the City of Buffalo and the county. Before being elected as county executive, Poloncarz served as Erie County's comptroller for six years, and previously practiced corporate and finance law in Buffalo. He holds a bachelor's degree from the University at Buffalo, State University of New York and a law degree from the University of Toledo.