The Prize: The Epic Quest for Oil, Money & Power (Paperback) 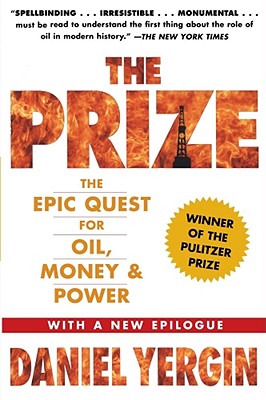 Winner of the Pulitzer Prize and hailed as “the best history of oil ever written” by Business Week, Daniel Yergin’s “spellbinding…irresistible” (The New York Times) account of the global pursuit of oil, money, and power addresses the ongoing energy crisis.

Now with an epilogue that speaks directly to the current energy crisis, The Prize recounts the panoramic history of the world’s most important resource—oil. Daniel Yergin’s timeless book chronicles the struggle for wealth and power that has surrounded oil for decades and that continues to fuel global rivalries, shake the world economy, and transform the destiny of men and nations. This updated edition categorically proves the unwavering significance of oil throughout the twentieth century and into the twenty-first by tracing economic and political clashes over precious “black gold.”

With his far-reaching insight and in-depth research, Yergin is uniquely positioned to address the present battle over energy which undoubtedly ranks as one of the most vital issues of our time. The canvas of his narrative history is enormous—from the drilling of the first well in Pennsylvania through two great world wars to the Iraqi invasion of Kuwait, Operation Desert Storm, and both the Iraq War and current climate change. The definitive work on the subject of oil, The Prize is a book of extraordinary breadth, riveting excitement, and great value—crucial to our understanding of world politics and the economy today—and tomorrow.

Daniel Yergin, chairman of Cambridge Energy Research Associates and the Global Energy Expert for the CNBC business news network, is a highly respected authority on energy, international politics, and economics. Dr. Yergin received the Pulitzer Prize for the number one bestseller The Prize: The Epic Quest for Oil, Money & Power, which was also made into an eight-hour PBS/BBC series seen by 20 million people in the United States. The book has been translated into 12 languages. It also received the Eccles Prize for best book on an economic subject for a general audience.

Of Dr. Yergin’s subsequent book, Commanding Heights: The Battle for the World Economy, the Wall Street Journal said: “No one could ask for a better account of the world’s political and economic destiny since World War II.” This book has been translated into 13 languages and Dr. Yergin led the team that turned it into a six-hour PBS/BBC documentary — the major PBS television series on globalization.  The series received three Emmy nominations, a CINE Golden Eagle Award and the New York Festival’s Gold World Medal for best documentary. Dr. Yergin’s other books include Shattered Peace, an award-winning history of the origins of the Cold War, Russia 2010 and What It Means for the World (with Thane Gustafson), and Energy Future: The Report of the Energy Project at the Harvard Business School, which he edited with Robert Stobaugh.

"Spellbinding...irresistible...monumental...must be read to understand the first thing about the role of oil in modern history." -- The New York Times

"A masterly narrative...The Prize portrays the interweaving of national and corporate interests, the conflicts and stratagems, the miscalculations, the follies, and the ironies." -- James Schlesinger, former U.S. Secretary of Defense and U.S. Secretary of Energy

"Splendid and epic history of oil.... The story is brilliantly told...with its remarkable cast of characters." -- The Wall Street Journal

"Impassioned and riveting...only in the great epics of Homer will readers regularly run into a comparable string of larger-than-life swashbucklers and statesmen, heroes and villains." -- San Francisco Examiner