The Mouse Who Played Football (Hardcover) 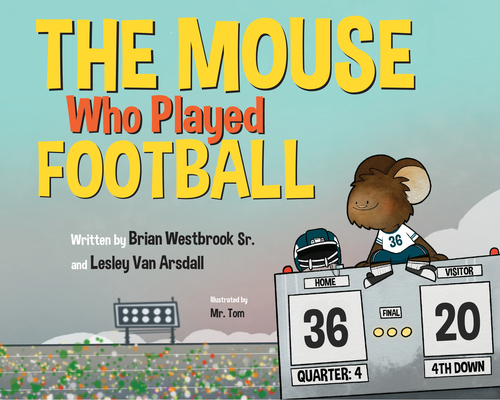 Some folks think Brian the mouse is too small. He may be a tough little fella, but they are not sure Brian has what it takes. The Mouse Who Played Football, by former Philadelphia Eagles running back Brian Westbrook Sr. and sports reporter Lesley Van Arsdall, shows how Brian the mouse proves everyone wrong with unyielding confidence that his small size can be his strength.

This charming children’s book, featuring appealing and dynamic illustrations by Mr. Tom, demonstrates how Brian the mouse overcomes what others see as a “big problem.” His determination—as well as speed and toughness on the gridiron—helps him become a star player in high school, college, and eventually, the MFL, the Mouse Football League.

The Mouse Who Played Football, based on Westbrook’s own experiences,is an inspiring story that encourages young readers to believe in themselves and make their unique differences their strengths.

Brian Westbrook, Sr. played nine seasons in the NFL, including eight seasons with the Philadelphia Eagles. He was a two-time Pro-Bowl running back and was named first team All-Pro after the 2007 season, in which he led the league with over 2,000 yards from scrimmage. He now makes regular broadcast appearances in addition to his charity work with the Brian Westbrook Foundation and speaking engagements.

Lesley Van Arsdall is a seasoned TV news veteran who has covered Philadelphia sports, local and headline news as both an anchor and a reporter. A graduate of the University of Pennsylvania, she lives outside Philadelphia with her husband and two sons. This is her first children's book.

Mr. Tom is an illustrator from West Chester, PA. While not painting and creating Acutely Believable Creatures, he spends time herding his three tiny humans and hugging his much-smarter-than-he-is partner.