One Night That Changes Everything (Paperback) 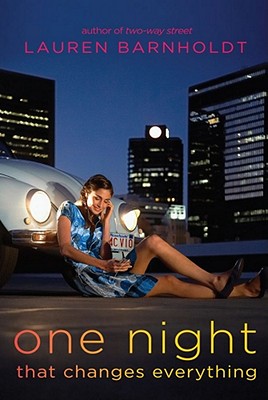 Two years ago, when Eliza Sellman was in ninth grade, her dad found out he was being transfered and the family was going to move. Having always been shy and not so confident about her body, Eliza took that opportunity to start a list in her private notebook of all the things she planned on doing when she moved but had always been afraid to--like wearing a miniskirt and asking guys to dance; singing karaoke in front of strangers; posting a photo of herself on her Facebook wall in a bikini...you get the idea. New town, new Eliza, right? Well, she'll never know because the transfer fell through and they didn't move. But Eliza kept adding her goals and secret fears to the list in the notebook. Now it's two years later, and in that time Eliza has had and lost her first boyfriend. But this was more than your average breakup...turns out the sweet and cute Cooper was only dating her as a hazing stunt by a secret society. Eliza got her revenge by posting some pretty nasty (and only sort-of true) stuff about Cooper online. That posting has had major consequences and now Cooper and his buddies have stolen her private notebook and won't give it back until she performs all the things on her list in one night. It's torture...until Eliza steals something from the boys she knows they'll want to trade her notebook for. What starts out as a night of humiliation turns into a night of revelations as Eliza learns what Cooper was really thinking when they dated, the real reason he's stolen her notebook, and how freeing--and life-changing--it can be to do the things you fear the most.

Lauren Barnholdt is the author of the teen novels The Thing About the Truth, Sometimes It Happens, One Night That Changes Everything, Two-way Street, Right of Way, and Watch Me. She is also the author of the middle grade novels The Secret Identity of Devon Delaney, Devon Delaney Should Totally Know Better, Four Truths and a Lie, Rules for Secret-Keeping, Fake Me a Match, and the Girl Meets Ghost series. She lives in Waltham, Massachusetts. Visit her at LaurenBarnholdt.com.

"Eliza, 17, loses her possessions on a regular basis. None of them, however, matters as much as her purple notebook. Her notebook is where she lists the things she would love to do but is most afraid of doing, from asking a random guy to dance at a club to kissing a secret crush. Via text messages, she learns that her notebook is in the hands of her evil ex-boyfriend, Cooper. He and his friends, who are some of the most popular boys in school, threaten to make the contents of Eliza’s notebook public unless she spends one night doing some of the things on her list. How Eliza goes about trying to overcome her fears is both hilarious and inspiring; readers will rejoice with her when she sees that she’s survived and boosted her bravery. The frankly funny dialogue, related in Eliza's first-person voice, provides more laugh moments while ably delineating character. A satisfying look at what it means to face your fears."--Kirkus

"An all-night madcap adventure [and] a fun read. Barnholdt has given readers another lighthearted window into contemporary teen life." --School Library Journal