Encounter at Farpoint (Star Trek: The Next Generation) (Paperback) 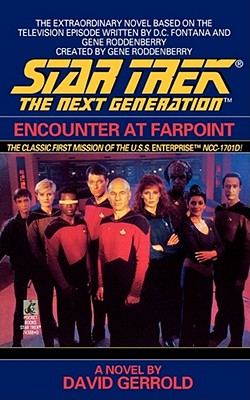 WHERE THE ADVENTURE BEGAN...

CAPTAIN'S LOG, STARDATE 41254.7: The U.S.S. Enterprise™ is en route to Cygnus IV -- the edge of the known galaxy. There, we will rendezvous with the ship's new first officer and the other command personnel and proceed with out mission: discover the truth about Farpoint Station, a starbase facility built by the inhabitants of Cygnus IV, a starbase of unparalleled size and complexity...and infinite mystery.

And the success or failure of this, our first mission together, may well determine the course of human exploration across the galaxy for centuries to come...

David Gerrold is an award-winning author and screenwriter. He wrote numerous books, including the War Against the Chtorr series, the Star Wolf series, and the novelette The Martian Child, which won both Hugo and Nebula Awards and was later adapted into a film. He also wrote the script for the original Star Trek episode "The Trouble with Tribbles."