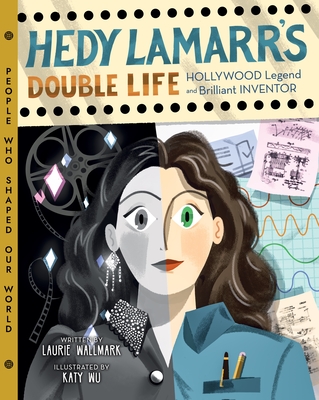 "Revelatory to young audiences in more ways than one." --Kirkus "Many STEM-for-girls biographies fan excitement over women's achievements, but this title actually brings the central scientific concept within middle-grade reach." --The Bulletin of the Center for Children's Books Selected for the New York Public Library Best of 2019 List Movie star by day, ace inventor at night: learn about the hidden life of actress Hedy Lamarr To her adoring public, Hedy Lamarr was a glamorous movie star, widely considered the most beautiful woman in the world. But in private, she was something more: a brilliant inventor. And for many years only her closest friends knew her secret. Now Laurie Wallmark and Katy Wu, who collaborated on Sterling's critically acclaimed picture-book biography Grace Hopper: Queen of Computer Code, tell the inspiring story of how, during World War Two, Lamarr developed a groundbreaking communications system that still remains essential to the security of today's technology. Selected for the 2020 Outstanding Science Trade Books for Students K-12 list, compiled by the National Science Teachers Association (NSTA) and the Children's Book Council (CBC).

Laurie Wallmark has degrees in Biochemistry from Princeton University, Information Systems from Goddard College, and Writing for Children and Young Adults from the Vermont College of Fine Arts. Her debut book, Ada Byron Lovelace and the Thinking Machine (Creston Books), received four starred reviews (Kirkus, Publishers Weekly, Booklist, and School Library Journal), praise in The New York Times, and numerous awards. Laurie lives in NJ. Twitter: @lauriewallmark. With a BFA in Illustration and Entertainment Arts from Pasadena Art Center College of Design in 2007, Katy Wu has worked for Google, Laika, Pixar, CinderBiter, and Simon & Schuster. Grace Hopper was her first picture book; her second was Dumpling Dreams, written by Carrie Clickard (Simon and Schuster). She has also worked on such projects as the feature film Coraline. She lives in New York City. Follow her online at katycwwu.tumblr.com.