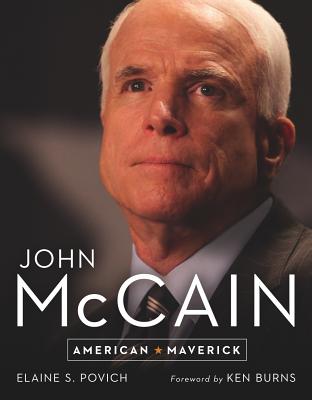 This lavishly illustrated volume--featuring a foreword by award-winning filmmaker Ken Burns--provides a compelling look at the life and career of Senator John McCain from his early years to today, exploring his legacy, his impact, and his place in American history. As of January 3, 2018, John Sidney McCain III, one of the most influential statesmen of our time, will have served as a US senator for 31 years--11,324 days. This unofficial retrospective honors and pays homage to Senator McCain's astonishing journey--a story of courage, resilience, and leadership; irrepressibility, determination, and grit. Written by acclaimed journalist Elaine Povich, it covers his childhood as the son and grandson of admirals, his service as a naval aviator in Vietnam and subsequent harrowing five-year imprisonment in a POW camp, his congressional and senatorial careers, his family, his presidential campaigns, and perhaps his most important role yet, as an elder statesman willing to stand up for the nation. With more than 100 photographs, highlights from notable speeches, and inspiring quotes, this book is a moving tribute to a true American hero and icon.

Elaine S. Povich is an award-winning Washington journalist and author of three books, including John McCain: A Biography (Greenwood). She has reported from Washington for UPI, the Chicago Tribune, Newsday, and, currently, Stateline. Povich is a recipient of the prestigious Everett McKinley Dirksen Award for Distinguished Reporting of Congress, among other prizes. She is an adjunct professor of journalism at the University of Maryland, College Park, and a member of the Gridiron Club, and is a past president of the Washington Press Club Foundation, a nonprofit organization that promotes journalistic history and issues. Ken Burns, the producer and director of numerous documentary films including The Vietnam War, The Roosevelts: An Intimate History, and The War, cofounded the documentary film company Florentine Films in 1976. His landmark documentary The Civil War was the highest-rated series in the history of American Public Television. His work has won numerous prizes, including fifteen Emmy(R) Awards, two GRAMMY(R) Awards, and two Oscar(R) nominations; and in September 2008, at the News & Documentary Emmy(R) Awards, Ken was honored by the Academy of Television Arts & Sciences with a Lifetime Achievement Award. He lives in NH.